We decided that we were going to enjoy more of Croatia’s coast and made our way up to the heart shaped peninsula, known as Istria, to the city of Pula. After announcing to our friends and family that we were traveling to Europe we found out we had a few friends also going. We were able to meet up with some friends while we were in Prague for a few hours. When talking to another friend, Sara, we found out that her and her newly wedded husband, Tom, were also going to be in Europe for an extended time and we were able to meet in Pula and share a 4 person apartment for a week!

Meeting up with Friends 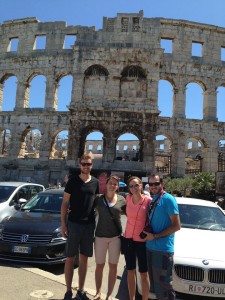 I love traveling with my best friend, Danielle. She and I have had a wonderful time exploring Europe and seeing all the sites. I can’t imagine trying to travel all by myself, and knowing that Danielle is as crazy as I am when it comes to traveling is a dream come true. We do enjoy meeting up with friends and being able to experience our adventures with others as well. Sara, of Rome Abroad, was returning for a third year to a nannying job for a family in Italy and had planned to meet up with them later on in the summer. Before getting to her nannying job we thought it would be a good idea to meet up, and so why not meet up in Croatia?

Northern Croatia has a lot of Roman influence (which you can see that from the miniature Colosseum they have down by the Marina). By miniature I mean smaller than Rome’s Colosseum, but it is by all means not small. This is one of the only Colosseums that still has all the walls intact. You could tell that there was some work done on one of the sections, but pretty impressive for being built between 27 BC – 68 AD! We didn’t pay to go in since it was small enough to see most of it from outside, and if you walk around to the back you can pretty much see everything inside since the road is higher. It’s a beautiful structure and it made us more excited to see the Colosseum in Rome.

Out on the Town

There were other ruins and sites to see besides the Colosseum like the fortress that was on top of a small hill near the marina. All the cannons were lined towards the sea and still looked ready to defend the city. Again, it cost some money to go inside, but we were content with just walking around it. If you walk to the left of the entrance you can get a good look of the city and the Arena from above. 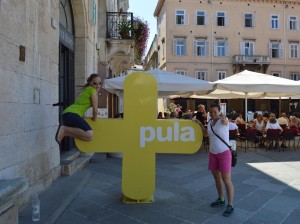 Being of Roman influence, Pula also had a Forum in town where the Augustov Hram was. To get there we walked through some old roman archway down a pedestrian street. There were enough small streets to enjoy walking around while eating ice cream to make this a very peaceful city. We did rent bikes on one of the days which helped us get to the beach. The swimming beaches are a little far off from the city. The ones in town are all marinas and not really swimmable. Like most of Croatia’s coast, it was also rocky but they had piers that allowed you to jump in to deeper water. After biking in the hot weather it was nice to get into the cool water. 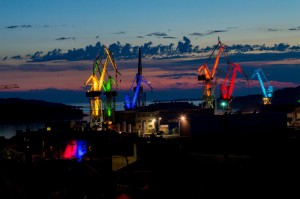 Pula for us was a nice time to relax. We were glad that Sara and Tom had also been worn out by all of the flights, buses and trains. They were okay with relaxing and taking it easy. Pula is fairly small with not a whole lot of things to do for free. If you wanted to pay for excursions and the like there was a lot of activities at the marina. We were all content with just enjoying the city and the beach. With its touch of Roman influence and nice coastal feel its no wonder we consider Pula a hidden gem.

Would you rather travel solo or to travel with friends?