The One and Only La Tomatina

In the small town of Buñol, Spain there’s an annual festival held on the last Wednesday of August called La Tomatina. This festival involves thousands of people throwing rotten tomatoes at each other and is one of the biggest food fights you’ll ever see. The festival has grown larger and larger since it’s origination back in 1945 when local young people started throwing tomatoes. The festival is purely for fun, and now over 50,000 people from all parts of the world join in on one of the funnest festivals in the World.

The countdown and the ham

I’d been wanting to go to La Tomatina since I’d heard about it in my junior high Spanish class and was determined to get there. Once we knew we were going to Europe and had bought tickets back in May the countdown on my phone began. 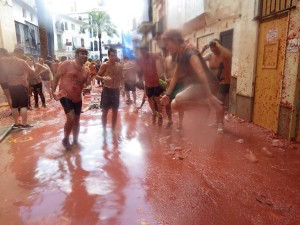 When we got to Buñol we walked down to the main street where the tomato trucks would be coming through. In that street there was the traditional post that had the festival ham hanging from the top. The tradition is that whoever can grab the ham keeps it, but also the festival starts then. Oh, did I mention that the pole is covered in bacon lard? And TONS of it! There were people climbing on top of each other, kicking and pulling each other down and other foul play. There were also people helping lift each other to reach the ham, and this is when someone got the closest to reaching it. In the end… no one ever could get it. We stood squished in the street watching the pathetic attempts at reaching this ham for about 2 hours until finally, the cannon for the beginning of the festival sounded and the chaos began.

The one and only La Tomatina

If there are 5 things I’ve learned from this festival they’re these:

Apparently if you give people enough Sangria they will do the most insane things, but for some the sangria is unnecessary to get them to do insane things (such as willingly put yo 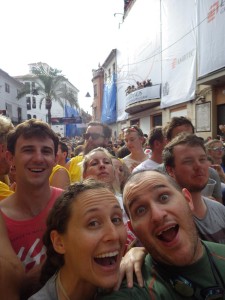 The first truck drove past, and even though it seemed like there was already no space for people to move we were practically shoved on top of the people behind us to let the trucks through. Some people really got to shoving and when it seemed like we short people might be in a dangerous situation I just used what I learned in soccer all these years- stick my bony elbows out and start digging. People surprising weren’t squishing me as bad after and I was able to bend down to grab some tomato smush off the floor.

Since we were all crammed together so tightly all that was exposed to the tomato throwing people in the truck was our heads, and since I couldn’t lift my arms up at times to catch tomatoes I had to take some to the face. So much for crushing the tomatoes before throwing them! I finally got arms free to catch tomatoes and also to grab whatever tomato was left on my neighbor’s shoulders or head. There was a water truck nearby that would blast water at us so it was a constant drenched cleaning than covered in tomato, rinse and repeat. So much fun!

My general target (along with everyone else’s it seemed) were the people in the trucks who were throwing and dumping the tomatoes out for us. A lot of the people in the trucks seemed to realize this and started ducking down behind the safety of the bed of the truck and blindly throwing out tomatoes. Meanwhile, some brave ones were sitting on the side of the truck pelting tomatoes at us while we blindly chucked them right back. It was hilarious and crazy, and we absolutely loved it!

The end… but is it really? 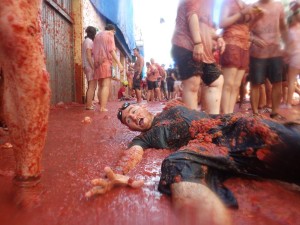 After an hour of food fighting the cannon sounded ending the festival. The streets seemed to instantly clear up and what used to be no breathing space became running and jumping space. Those that stuck around slid through the pools of tomatoes, splashing and throwing tomatoes. It was the funnest part of the whole festival, and technically it wasn’t the actual thing (we weren’t supposed to throw anymore tomatoes after the cannon, but no one was stopping us). I can’t imagine what the clean up must be like, but there were already people power washing down the buildings and huge drains were opened where tomato juice was flowing quickly through (good thing we didn’t slide there and fall in!)

Once we had our fill of tomatoes we started the walk through the town back to our bus. Along the way the locals had hoses coming from their balconies, garages and front doors hosing groups of tomato covered strangers. The locals seemed to enjoy hosing everyone down, and some started dancing as they did so. The water wasn’t nearly enough to get all of the tomato off of us, even though we stopped at several houses along the way to get what water we could to wash off. We did the best we could, shook off the residue and dried off with all the other thousands of people before getting on the bus.

Before the festival had started everyone was stocking up on food and drinks (mostly alcoholic for everyone besides us). The locals were making bank off of all the festival goers, selling small sandwiches for €5+. We had to eat something because that was pretty much all the food we were planning on getting for the day, and bought one from a pet shop where a sandwich booth was set up (never thought I’d be buying food for myself right outside a pet shop!) Another reason why locals probably love the festival so much is because of how many clothes, shoes and goggles were left behind unwanted. They started gathering up the large piles as people left the trail of clothes behind them on the ground.

Farewell Buñol, it was fun but it’s time to sleep 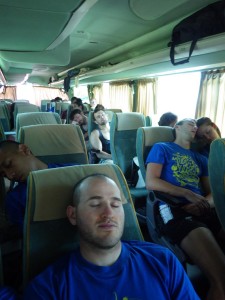 Once our bus took off from Buñol everyone fell silent. I looked around curious how no one could be talking and saw that everyone was passed out from exhaustion, some snoring and others in some uncomfortable looking positions. I grinned and leaned back closing my eyes. We all rested for the rest of the ride back to Madrid.

I now have a new bucket list for traveling that is for some of the coolest festivals in the world that I really want to see for myself! Check some of them out and see if you’d want to go to them as well!

Would you want to be in La Tomatina Festival?

Check out more of our Red Sauce Mess!