As we finished with Finland it was time to board our ship. We set out as Vikings taking the next country by sea. Our instincts told us there was no danger in Sweden, only unaware tourists in our path. We would fight for the Swedish meatballs and conquer the sites.

We embarked on the Tallink Silja Line link (for 42 euros pp) traveling through the night. Since we were so far North in mid winter the sun dipped down close to 1 AM. I was in awe from the sight of it and decided I’d come during the summer to see the midnight sun During the Summer (from May to July) in the Arctic Circle when the sun never sets. People who live there struggle sleeping, but as a tourist I would love to witness the midnight sun for at least a few nights. 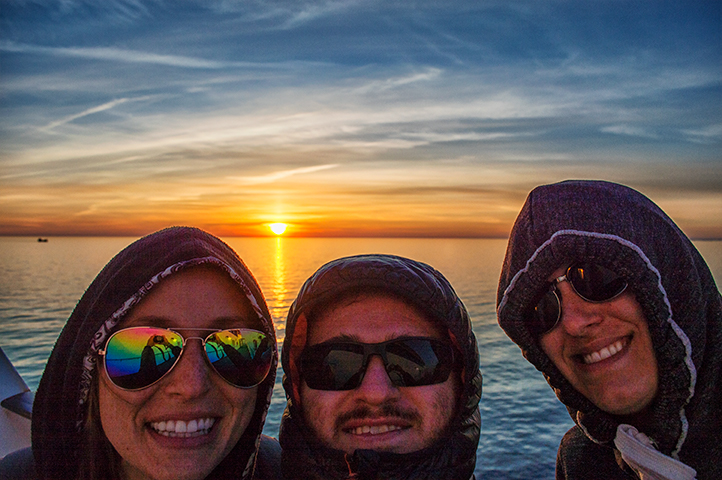 The food on the ferry was too costly so we’d brought our own dinner and snacks. All 3 of us fit nicely in the sleeper room and each had a bed that pulled down from the wall. I seem to sleep so well on ships, probably because the room is so dark and the rocking from the waves is hypnotic. ‎

Although we weren’t raiding any ships or countries we were certainly taking what memories we could with us from Sweden. Although, I did want to raid some of the souvenir shops since there were some fun items there! I also wish I could’ve packed home a suitcase full of pastries. Since this was our last European country that we’d be visiting for who knows how long we subconsciously were eating a lot more pastries than normal. 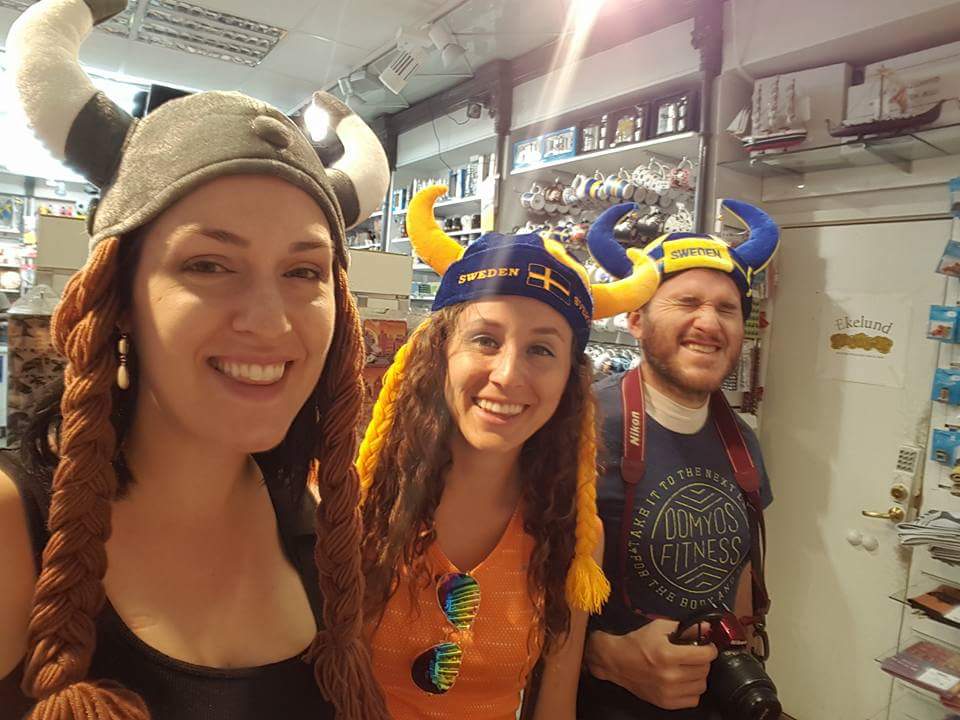 ‎A given that we would eat Swedish meatballs, but where to find them?? Since we already planned to visit the IKEA in the country it started in we figured there’d be plenty of meatballs in the cafeteria. There’s quite a buffet of food and we could’ve eaten to all our heart’s content. There was a line outside of the IKEA early in the morning so we obviously weren’t the only ones with the idea.

Sweden is gorgeous and we only saw Stockholm! With over 30 museums just in the vicinity of Stockholm we managed to make it to none of them. We opted to take to the streets and see the beautiful city on foot. In the Storkyrkan we sat in the back of the pews watching from the shadows what the church goers were doing. We walked like peasants on the outside of the Stockholm Palace and house of the nobility. Our best touring technique is basically soaking in anything that we could set our sites to. 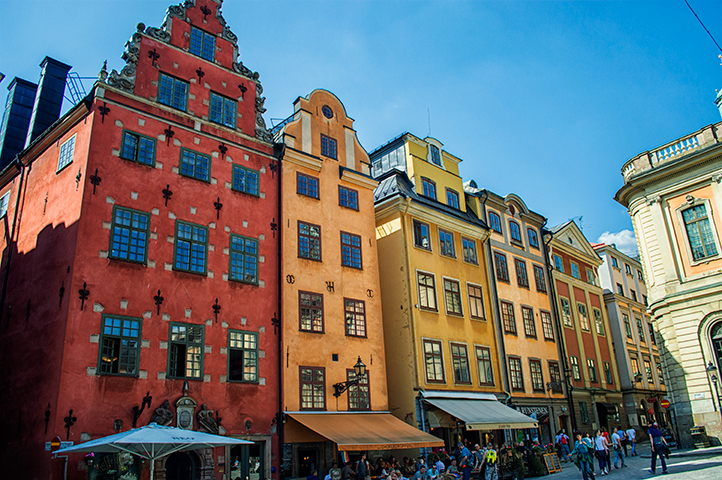 The subway in Sweden is 110 km long with over 90 of the 100 stations decorated with art. Some consider it to be the largest art gallery, with art pieces dating back from the 50’s to now. Leave it to Sweden to make something as unappealing as a subway station turn into a stylish piece of art. There’s a lot of subway that we didn’t cover so if you want to see more pictures click here. 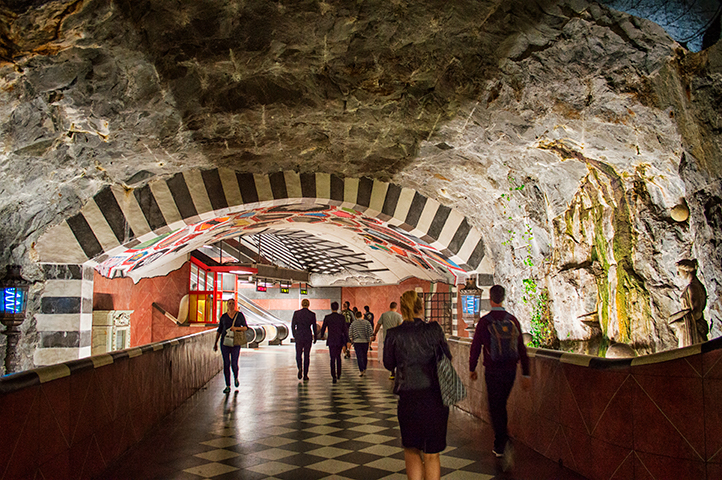 Where to stay in Stockholm

Like any Scandinavian country, Sweden is very expensive. You’re best to find a decently priced place to stay either with Airbnb or at a hostel. Hostels in Scandinavia are nice and clean like the countries themselves, and the best way to go if you’re traveling solo. However, if you’re in a group I’d always recommend renting a space from Airbnb as it will be cheaper for a group and more for your money.

In either setup you have your own kitchen so you can cook meals and save money, as well as get to know the locals. A lot of times there will also be a laundry machine if you need it. If you sing up for AirBnB you can get a discount here. 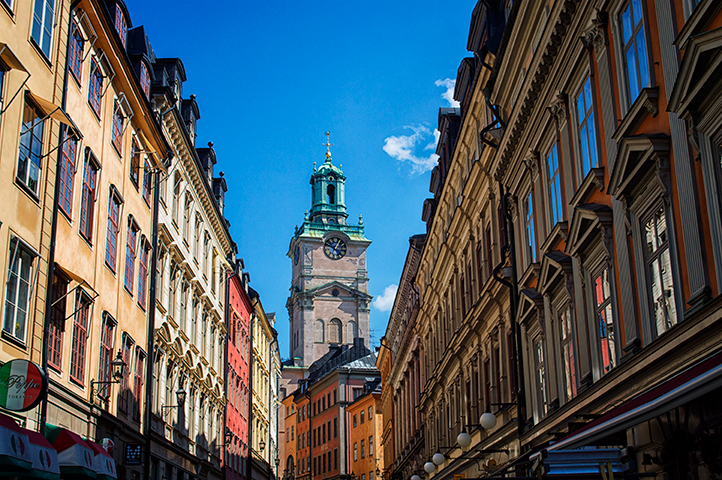 We were in a cozy dorm room that made impressive use of it’s space. That’s an admirable attribute about Europeans – they live simply and don’t need ridiculously huge homes. We were literally across the street from the train which was convenient during the day. Downside is that at night we could hear the train horn throughout the night. Whenever you’re choosing a place to stay on a trip do as much research as you can of the area where you’ll be staying. 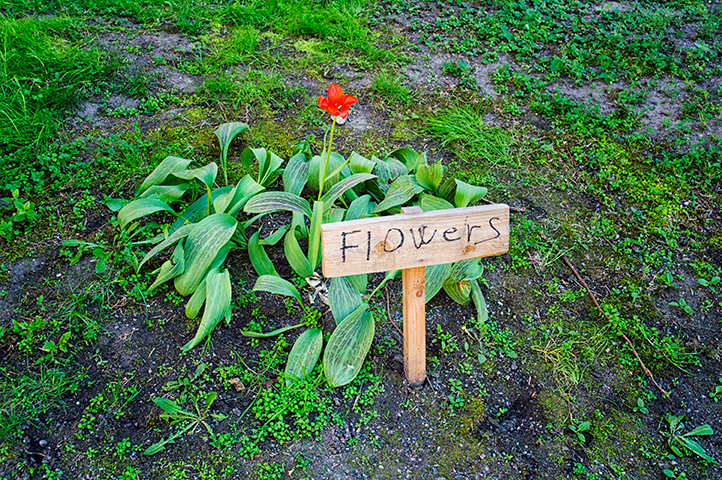 Farewell Europe, until we meet again!

It’s been quite the year! If you haven’t followed us on our journey, you should check out our experiences in the blog. We managed to make it to 52 countries and territories in 52 weeks! Our journey began in Europe where we went to the majority of the countries there and then hopped over to Asia. In Asia we traveled to 6 countries and then back to Europe again.

We went down south to Africa into Morocco making our journey involving 3 different continents. I haven’t counted up all the cities we made it to, but it’s certainly in the hundreds! There have been many memorable moments – some sad, a lot exciting and eye opening but all worth it in the end. I’m so grateful for the opportunity we’ve had to travel and the impact it’s had on our lives. We hope you continue to join us as we keep on exploring the amazing world we live in!

Until the next adventure my friends,