The colorful villages of Cinque Terre 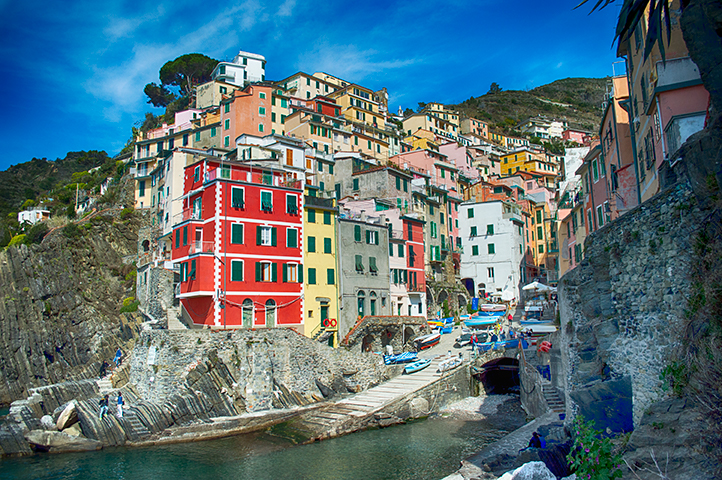 Cinque Terre, which means 5 lands, consists of the 5 coastal villages: Riomaggiore, Manarola, Corniglia, Vernazza and Monterosso that line the Mediterranean on the Italian region of Liguria. I remember putting together a puzzle of one of the villages, Riomaggiore, thinking that it was too beautiful to be real. Ten years later… the villages of Cinque Terre turned out to be very real, and better than I imagined them to be.

As we were leaving Monaco and heading to Cinque Terre the sky was drastically changing from clear skies and sunshine to brooding and rainy. We were driving through the crumbling roads to the village, Corniglia where we’d booked a cozy place to stay. My stomach was in knots from the curvy and classic European two-way roads that should only be meant for one-way driving. The roads were literally crumbling down the hills and the Italians fixed it by putting cones and barricades where the recent crumblings were. I was happy when we made it to Corniglia without incident and the sky cleared letting the sun come out to boost Corniglia’s appearance. 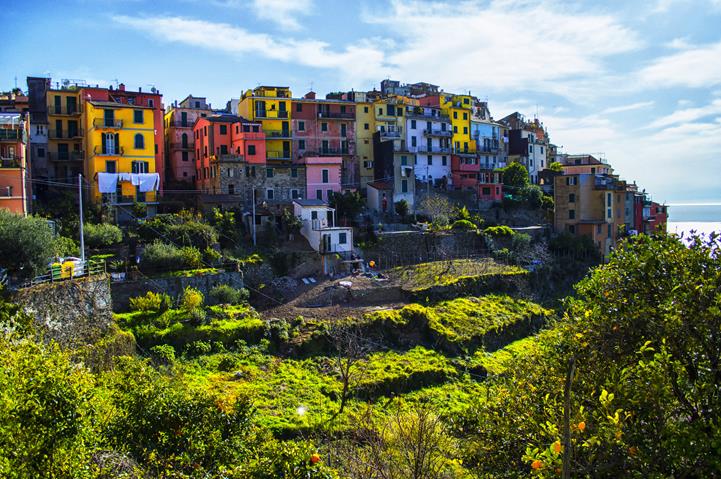 I instantly fell in love with Cinque Terre. The colorful villages tiered on the rocky ocean cliffs with boats bobbing in the harbor and the ancient vineyards terraced all around brought me so much bliss and tranquility. Not to mention the smell of orange blossoms and sea breeze, delicious pizza, pasta, gelato and slow paced vibes. These Italians really know how to live! 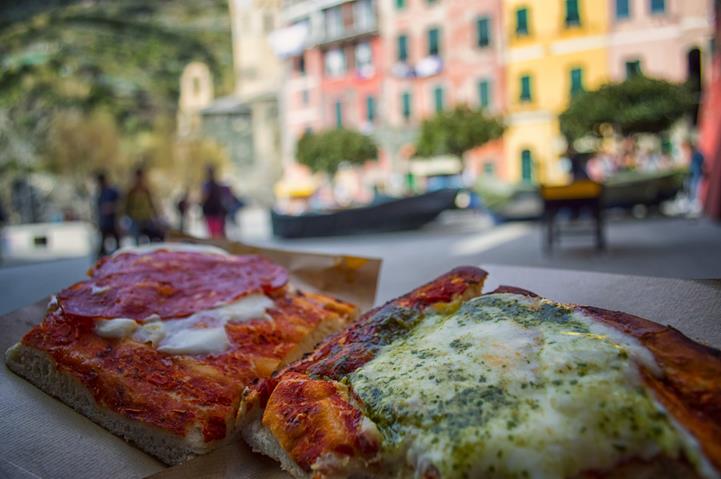 Seeing just one village in Cinque Terre is great, but being able to see all five in one day is even better! There’s a train that you can take to each village, or if you’re feeling up for some exercise there’s a hike that will lead you through all 5 villages as well. At least, that’s what we started out the next day thinking…

Since our village, Corniglia, is in the middle of the 5 villages we took the train to the beginning of our hike in Monterossa where the hike starts out strenuous and gets easier towards Riomaggiore. Monterossa is the best out of the 5 villages for swimming because it has the biggest, sandiest and cleanest beach. It will be colder in April and May for swimming, so better to go between June and September for that. 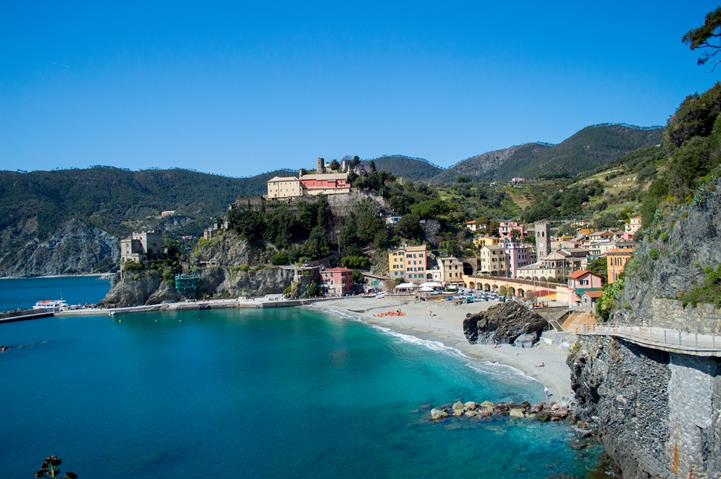 As we hiked up and over vineyards we hardly noticed the strain from the hikes because of the scenary. We came down to the second village, Vernazza, which was an obvious favorite to a lot of tourists judging by the large amount that were there. 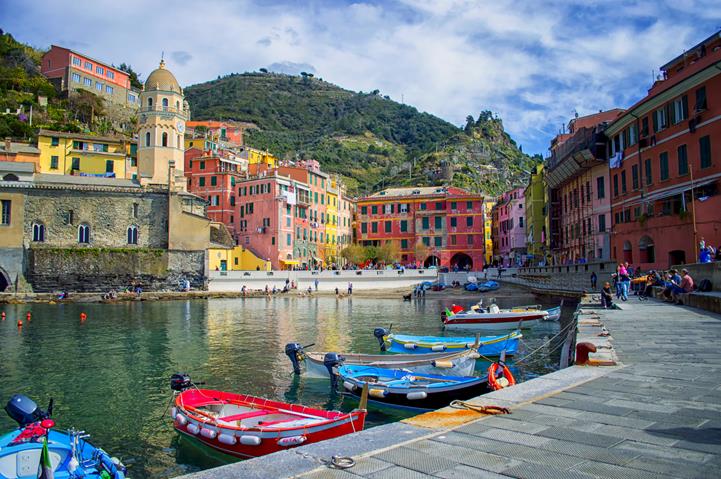 The next stop was to our village, Corniglia. On the way from Monterossa we’d heard from other hikers that the footpath at the end of the hike had been destroyed and wasn’t open. We wanted to make sure for ourselves, and sure enough the hike after Corniglia to the last two villages was closed. We were disappointed to not be able to hike the whole thing, but we got gelato to cheer ourselves up and we still had the train so we could still see the last two villages.

We headed down the hundreds of stairs to the train station to catch Riomaggiore for sunset. It took us too long to get down the stairs and we missed the train. Corniglia is a more secluded and romantic spot, and the huge staircase to the train probably adds to the seclusion from other tourists. We enjoyed our stay, but I would only recommend it for young couples. The next train didn’t come in time, but we were able to sit for over an hour making friends with a fellow traveler while we watched one of the most impressive sunsets I’ve seen in my life. 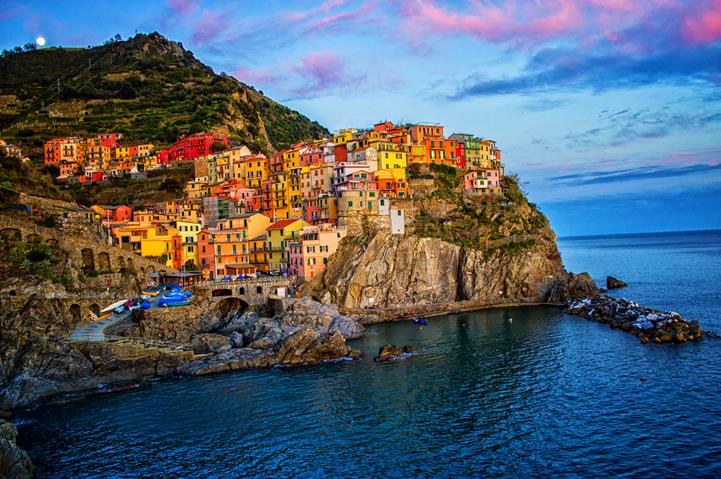 Even though the way we were going to see the Cinque Terre Villages didn’t go as we’d planned at all I didn’t care when I finally saw the last of the villages, Riomaggiore. I felt like I was transferred to a different world when we were in Cinque Terre, maybe because I fell in love with this place before even seeing it, or because there really is something captivating here that has all tourists swept up in it’s wonder. I just know that I’d found one of my favorite places on this big Earth and am grateful that I saw a picture of Riomaggiore several years ago. 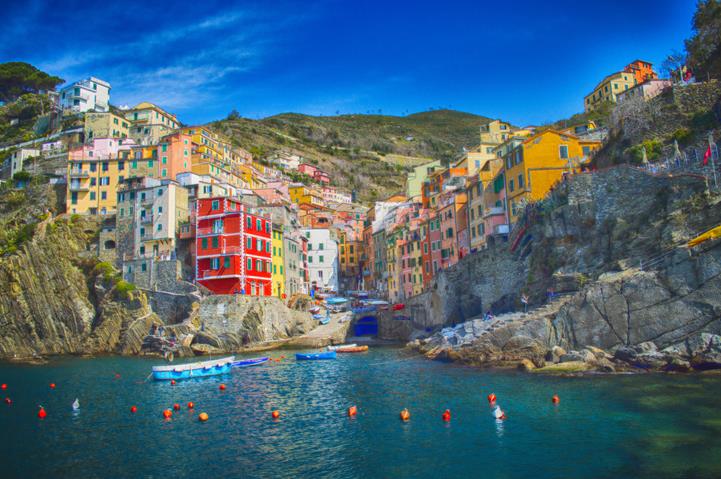 I could’ve easily stayed in Cinque Terre and I would’ve been happy as a clam, but as Lisa St. Aubin says, “travel is like flirting with life. It’s like saying, I’d stay and love you, but I have to go.”

Where have you traveled to that you would’ve been happy staying forever?