Tulip time in the Netherlands

Finally, we traveled to the Netherlands, AKA Holland! Even though the country is rather small and doesn’t take more than a couple of hours to drive from one end to the other we still didn’t have enough time for all the places to see and things to do.

We flew into Amsterdam from Istanbul and stayed at the Euphemia Hotel, which was actually a hostel, but it was nice because like most hostels we were very central to everything worth seeing. We were also able to store our bags after check out in able to walk the city without them (which helped a ton so another bonus to hostels). I go back and forth on liking or hating hostels because we never get good sleep, but if there are enough benefits and it’s cheaper than an Airbnb we find it worth staying in one.

Pablo’s been excited to go to Amsterdam since we were talking about coming to Europe. It’s such a beautiful city with a canal on every street lined with boats and mismatched apartments. Instead of cars and minivans people had their families piled on bikes and trailers attached to bikes. The atmosphere was fun and people seemed so happy – maybe because of all the weed! We stumbled upon the red light district where there were all sorts of colorful things, including but not limited to a condom super shop, various sex shops and you get the point. We also found the famous fries and sauce that we were searching for!

The Anne Frank Museum is one of the most popular tourist spots in Amsterdam and rightfully so. We tried getting tickets ahead of time, but they were sold out. Once we were in Amsterdam we walked to the museum to see if there were any tickets left and it turned out there were plenty, we just had to wait in a line for 40 minutes (again though, completely worth it!).

I’d read Anne Frank’s Diary when I was in Junior High, but it was a huge difference in meaning to me walking through the actual house where Anne and her family were in hiding. There were things that we learned and felt about her experience that I couldn’t have gotten from only reading the book.

The fields upon fields of tulips are what I was particularly wanting to see in Netherlands so I made sure we came in the Spring. We did see fields of tulips, but we seemed to have come the week a lot of the fields had been harvested and flowers weren’t put in yet. It seems hard to miss seeing flowers in the Spring though because different flowers bloom at different times. 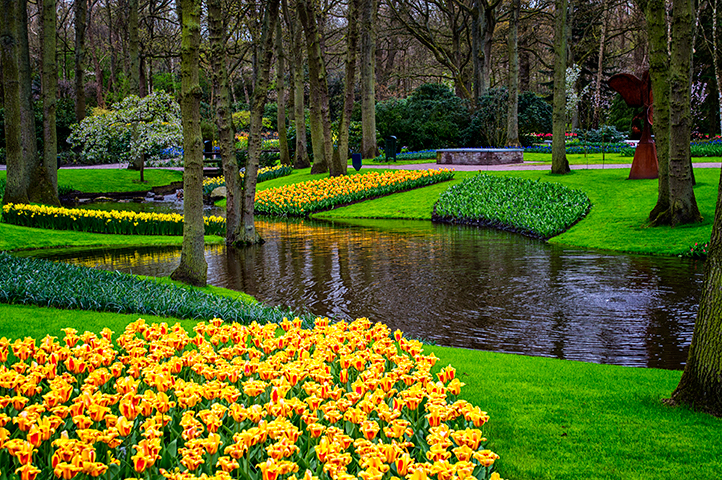 I saw more flowers in one day at Keukenhof than I’ve seen my entire life. The greenhouse contained several types of flowers and the smell seemed to clear all the pollution I’ve ever inhaled from my lungs. I thought that we’d just be looking at rows of tulips in Keukenhof, but there were more things to do and see than that. 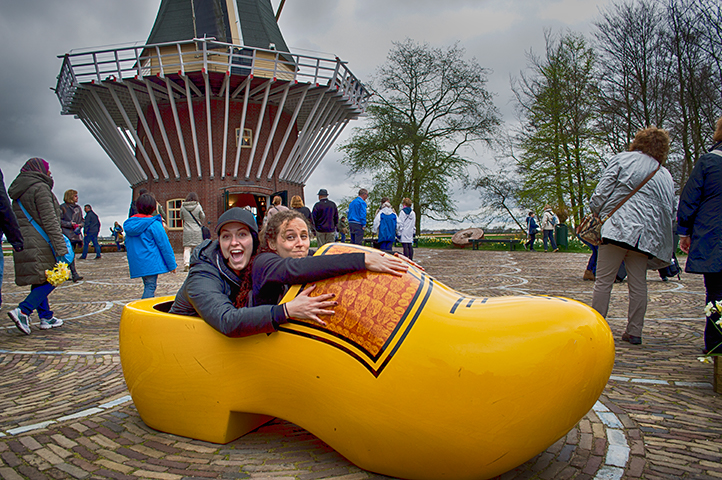 *There can be a queue for tickets at Keukenhof so I’d recommend buying yours online for the same price. 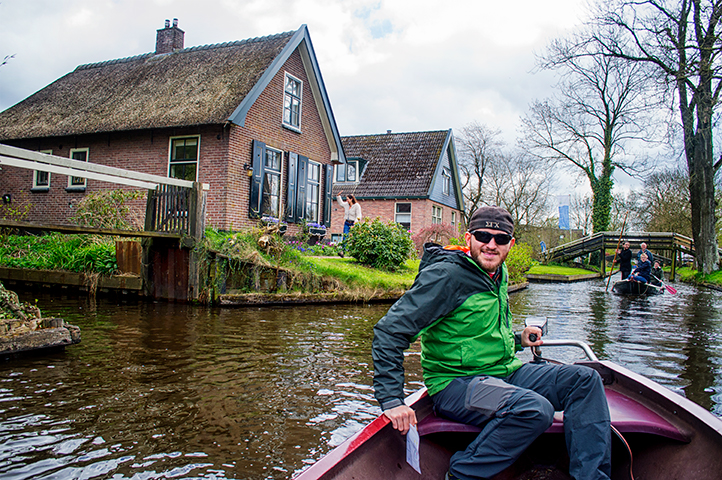 This peaceful realm of floating homes were untainted by tourists making it all the more fun for us. We rented a motorized boat for only 15 euros and had it for an hour to cruise through the canals. This was a genius tourist move because it was an unforgettable experience to steer through this unique neighborhood. I even got to drive the boat and did a great job! That was until I had to park it where we’d rented it… and Pablo bumped into a couple corners and almost ran over a duck. Usually we’re good tourists and leave a place as good as we find it, but I think the curb of the canals were tough for rookies like us.

All these windmills were brought together in an amazing display at Zaanse Schans and it’s free to enter. The area is amazing and exactly what I imagine the Netherlands to look like. Each windmill costs to enter and parking costs, but it’s fun to walk around the old styled town. There are also plenty of snacks in the shops and windmills too!

There were a good few windmills at Zaanse Schans, but we wanted to sight see more so we headed to Kinderdijk where there were surprisingly a lot more windmills. From what it appeared people are actually still living in the windmills in Kinderdijk, which was free to enter as well. We walked around enjoying how cool it all looked and imagined having a backyard like their’s. 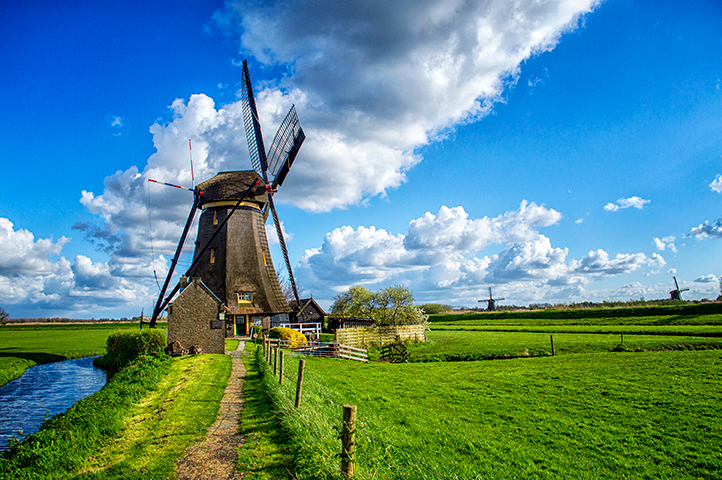 We were thrilled to have our friend Melissa from back home join us as well as the chance to meet up with our friends who lived in the Netherlands that we’d met earlier on our trip in Macedonia. We were able to save a lot of money when our Netherlands friends invited us to stay with them at there house.

We went to church with our friends and found out that one of them was in the movie the Best Two Years, along with other people in their ward. In fact, the church house we went to was where some of the movie was filmed and talked to someone about the filming. It was a cool experience because seeing that movie is what made me want to travel to the Netherlands in the first place.

We watched a street food show where the guy went to Amsterdam and tried the pickled herring and stroopwafels which instantly got us hooked on trying them in Netherlands. Since those are two must-try foods in Amsterdam we hunted those down like starving dogs. We found the pickled herring the first day, and it was delicious! 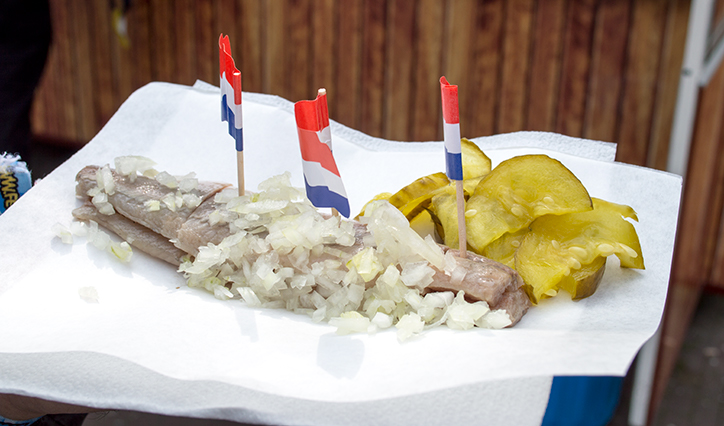 The fresh stroopwafel was much harder to find since the stores only had the packaged dry ones. We learned in our searching that you usually find them at Saturday markets so we impatiently waited. Once Saturday came we hunted down the closest street market (Albert Cuyp Market) and found the delicious syrupy waffle pancakes. 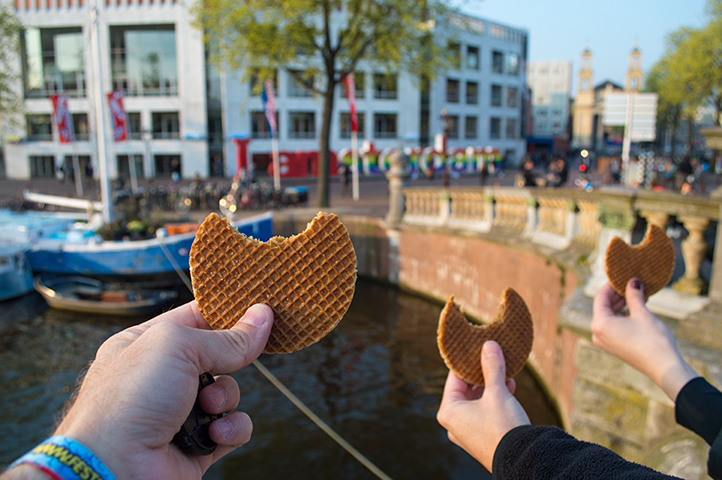 We also found that Amsterdam has a cheese factory museum where you can sample tons of different cheeses to your hearts content. We also couldn’t resist trying on the classic Dutch outfits complete with wooden shoes.

We love food, but we’re not huge foodies like our friend Melissa so since she joined us in our travels we’ve been testing more of the local food. Usually she wants to sample everything, but doesn’t usually finish it so we get to try a lot lately!

Things we missed and recommend:

There’s a very popular and fun holiday in the Netherlands called King’s Day, which is on his birthday- April 27th. The holiday used to be called Queen’s Day, which was on April 30th- the Queen’s birthday, but I guess he wanted to change it. Everyone dresses up in Orange (Netherlands color), goes out to eat, hang out, have fun and listen to music.

The Ten Boom Museum in Haarlem was highly recommended to us by our local friends, but we didn’t have time to go to it. The Ten Boom Museum is similar to Anne Frank’s story and the museum, where as it’s about a women who also hid during WWII. Her story and the museum aren’t as popular as Anne Frank’s, which makes it a more intimate and special experience for a tourist.

What would you want to do in the Netherlands?