Up until this point we’ve tried some fun and tasty foods along the way. Some of our favorites are the deep fried scones from Hungary called Lángos that we chose to have topped with garlic butter, sour cream and cheese every time (there are dessert ones too). 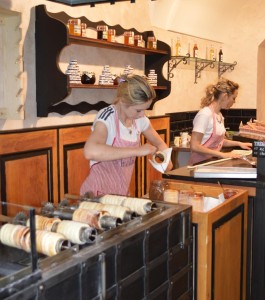 From Bosnia and Herzegovina we left wanting more Börek, which are pastries made of a thin and flaky dough filled with variations of meat, cheese or spinach. The börek is baked in a large pan and then cut as a pizza slice.

In Prague our mouths watered whenever we saw the trdelniks (which was basically around every corner), and had to get some. They’re rolled pastries that vendors sell warm and covered in sugar with chocolate smothered on the inside. (I could eat these pastries until I’d have to be rolled away).

One of the highlights of traveling with the family was spoiling ourselves by eating out every meal in countries that seem to have the best foods in Europe. We’d saved up and hadn’t eaten out as often as we could’ve so now it was time to really splurge. 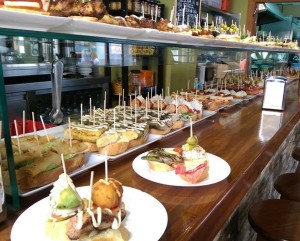 It took us a little while to figure out that tapas, or pinchos, are really just finger foods. We’ve seen tapas in other areas of Europe but they’re very popular in Spain, where people usually go out for drinks at the bars to relax and have their selections of tapas. This cultural practice didn’t work for the Figueroa family since we like our well proportioned meals that are eaten quickly and without the alcoholic beverage. We squished our large group into a few bars and tried different tapas, but it’s not cheap to pay one euro for a snack and to still be hungry at the end of the night so after a couple nights of this we moved onto a restaurant. 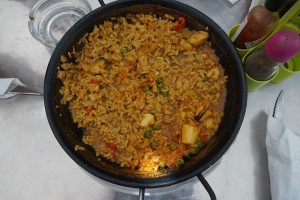 An authentic meal that is highly recommended when traveling through the East Coast of Spain is paella. Paella is a Valencian rice dish with either seafood, chicken, or other variances combined with vegetables and beans. This is definitely a dish that needs to be tried in several different restaurants and we definitely did not try enough of it to decide whether we’re fans of it or not.

We’re big fans of the gyros from home so we were excited to try the authentic gyros from Greece. We gorged ourselves on the meats, pita and tzatziki sauce. The tzatziki sauce was amazing and would be easy to make (it’s just yogurt mixed with cucumbers, garlic, salt and olive oil). 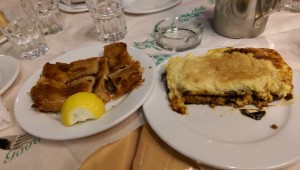 Another authentic dish we had was Moussaka, similar to lasagna because it has ground meat but is stacked with potatoes instead of pasta. The eggplant in it wasn’t our favorite, so the moussaka we tried in Bulgaria without eggplant was better.

A sweet treat to try in Greece is baklava, which is an overwhelmingly sugary pastry made of filo layers thick with honey and syrup. Eating this pastry cured my sugar cravings for a week and we had a few while in Athens. 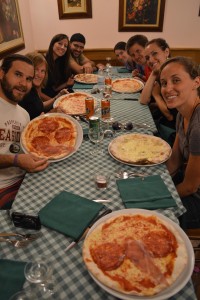 The pizza in Croatia and other Mediterranean Countries had proven to have amazing pizzas and pastas so my excitement to try authentic Italian food was building. Once we arrived in Italy we didn’t waste too much time before trying the food. I started with the spaghetti bolognese, lasagna, tortellini, fettuccine alfredo (you know the basics), and then tried so many new pastas that all tasted delicious! We couldn’t go wrong with what we ordered, and everyone would share so we got a little of everything.

As if the pastas weren’t enough, we had our variety of delicious pizzas as well, and all were baked fresh Italian style. At this point in the trip we all were passing plates and reaching forks to try each other’s dishes. 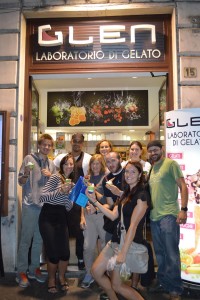 Pizzas and pastas weren’t the only foods I was excited for in Italy. As you can probably guess and have already heard about the gelato in Italy being delicious, and it certainly is. Gelato is the Italian version of ice cream and during our trip in Italy it proved to be somewhat of a constant search for good gelato shops. While we were in Rome we were lucky to have booked an Airbnb just down the street from the best gelato shop called “Glen Laboratorio di Gelato.” The owners are a married couple who make the gelato themselves and are willing to give us as many free samples without acting annoyed or frustrated (something we came across a couple times when trying gelato elsewhere). They were very polite and we hope their business does extremely well because they deserve it! 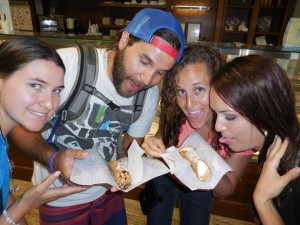 A dessert that I was anxiously wanting to try was the cannoli. Thankfully we were able to try a couple cannoli, which are pastry desserts that are “little tubes” filled with a cream and topped with all sorts of different toppings. We enjoyed a simple white sugar powder and chocolate cannoli. Downside of sharing a little one only was that it made me want to eat more.

Our first night in France we wasted no time in going out to dinner in search of crepes. I’d held back getting any crepes until then and I was ready to eat crepes until they were squeezing out my ears. It wasn’t difficult to find stands and shops that made crepes and our group swarmed around the crepe maker eager to get one of the large crepes he was expertly making. There were chicken sandwich crepes, ham, egg and cheese crepes, dessert crepes… crepes crepes crepes! I was in heaven.

I actually wasn’t satisfied with the little amount of eclair that I got to try in France. It was filled with a chocolate pudding instead of a cream filling and it was way too sweet for my liking (crazy that I would ever say such a thing). We stopped in a shop that had eclairs, but they were over 5 euros for just a normal sized one! They seemed more like artwork than edible treats. With my heart slightly broken, we moved on and saw no more of elcairs. 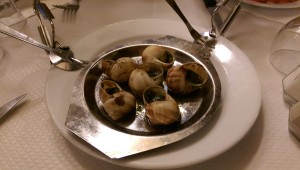 On our last night in France we went out to dinner at Le Boullian Chartier, an authentic French Restaurant. We were excited to try some more authentic foods besides crepes and ordered the escargot without hesitation. When the waiter brought the escargot we dove right in, grabbing the little fork and holding the shell with the tongs, we pulled out the cooked snail and chewed. Surprisingly, not bad at all. We also ordered authentic pork and steak dinners and a French dessert (sorry I can’t remember what it was called) to top off the great meal.

I know there were many more foods for us to try, but as usual there’s not enough time. If there are any foods that we missed that you recommend, please feel free to let us know so that we won’t miss them if we make a second round to these countries.

Which authentic foods would you want to try?