We wasted no time in seeing the sights in Germany. Once our plane touched ground we were picked up by Pablo’s mom’s friend who is currently living in Germany. With over 13 years of living in Germany, she already knew of some amazing and fun places to visit, things to do and foods to try. We were excited to have such a great guide and friend with us the whole way. 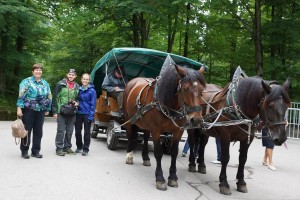 The distance between the two castles is further than it appears and we opted to take a horse drawn carriage ride up the steep hill to Neuschwanstein Castle from Hohenschwangau. The carriage rides stopped by the time we’d finished our tour through Neuschwanstein, but we were happy to take the scenic route down through the trees.

We did a tour through both of the castles, but I wouldn’t recommend it since the tour was listening through a headset and it didn’t last very long. The best part, as expected, was to view the castle from the outside. This castle is incredible and it’s no wonder why it was an inspiration for the story Sleeping Beauty as well as other fairy tales.

On our way home from Neuschwanstein Castle we stopped in Munich to eat and ran into a lot of the crowds from Oktoberfest. Men dressed in their lederhosens and women dressed in their dirndls crowded the sidewalks having finished their celebrations in the beer tents. We stopped in at Hans im glück, which was a cool restaurant that had amazing burgers and fries.

After filling ourselves we walked around the city center to Marienplatz which is the central square, and by the New Town Hall. Unfortunately it was dark and raining so we didn’t get to linger very long to see more, but we could tell it’s a very cool looking city. 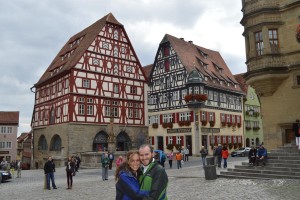 In the district of Ansbach there’s an incredible little town called Rothenburg that every tourist needs to visit when traveling through Southern Germany. I could only imagine how amazing it would be to visit Rothenburg during the Christmans season, but we still got to see a couple Christmas shops and some beautiful cuckoo clocks. We had lunch at Reichsküchenmeister and afterwards walked around the small medieval town.

We drove to Nördlingen after visiting Rothenburg, and although Nördlingen may not be as quaint as Rothenburg it still has it’s charm. Like we did in Rothenburg, we walked the high city walls in Nördlingen, but this time we ended up walking around most of the city. Rothenburg and Nördlingen are 2 out of 3 towns in Germany that still have completely established city walls, and both were the highlight of the towns because of the views they provided. 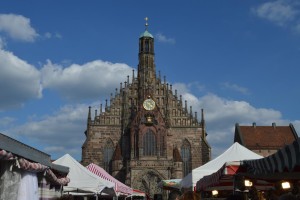 Every autumn Nuremberg has an Altstadtfest, or Old Town Festival, where they celebrate local traditions and regional food. We enjoyed stopping in for a tour of the town up to the Nuremberg Castle, Cathedral and the Church of Our Lady which were all beautiful pieces of architecture. The city was covered in festive booths selling all kinds of trinkets, treats and delicious smelling food. 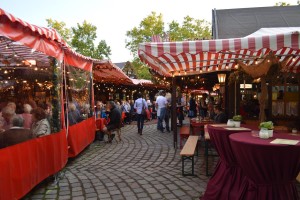 We didn’t last long walking through the aroma of smells and had to find a place to eat. We ordered the recommended authentic food as usual and enjoyed the scenery. It had started to get dark and the tents began to glow and the music became louder as people came out to celebrate. We saw men wearing lederhosens drinking liter sized mugs of beer and the waitresses wearing dirndls carrying drinks for customers. It wasn’t the first time while we’d been in Germany that I was feeling like I was witnessing a movie set.

We discovered that Germany has some pretty awesome festivals and events throughout the year. Another festival we were able to go to while visiting was the Pumpkin Festival at the Ludwigsburg Palace that happens every Autumn. We took a tour through the Ludwigsburg Palace, which turned out to be very cool and definitely better than the tour through the castles in Hohenschwangau. The tour was given by an actual tour guide and lasted over an hour through which we saw a lot of the palace. 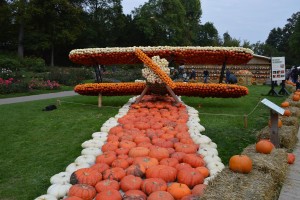 After touring the Palace we went around to the enormous back gardens where the Pumpkin Festival was being held. There was live music, crowds, themed foods and everything you could ask for in a festival. We ate pumpkin soup, pumpkin fries and had some pumpkin cookies while enjoying the atmosphere. Afterwards we were off to see all the clever pumpkin arrangements. Every year the festival has a theme for the pumpkins to be displayed and this year it was “Fliegen, Pumpkins Take Flight!” The Palace grounds were never-ending and I’d never seen so many pumpkins before in my life.

Germany turned out to be incredibly beautiful and we were so glad to visit the countryside and get a different view of a country than what we’re used to seeing.

Did you struggle pronouncing some of the German words in this post?