In French a common farewell or goodbye term is, “au revoir” which means “until we see/meet again.” Paris was bitter sweet for us. It was an enchanting city to visit, but it was also the last city we would have all of our travel buddies with us.

With what I’ve read through other blogs combined with our experience I would have to say that visiting in the fall seems like one of the best times to go to Paris. The crowds seemed manageable so I couldn’t imagine going in the Summer when they’re at their worst. We did get rained on a couple times, which didn’t last long and we planned to be inside when the forecast predicted rain. Besides, it rains frequently in Paris anyways and a little rain never hurt anyone.

Race you down the Eiffel 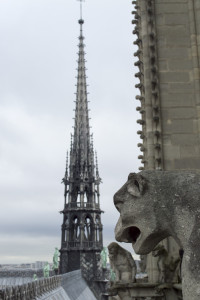 Call me cliché, but I was immensely looking forward to seeing the Eiffel Tower and the Notre Dame Cathedral. We got into Notre Dame for 8.50 euros and climbed to the top where the bell towers, gargoyles and the hunchback were hanging out. Definitely worth it! Just make sure to go as early in the day as you can.

Before going to the Eiffel Tower we hurried to see the Arc de Triomphe and half of us climbed to the top (for 9.50 euros) while the other half walked around. I liked the view from the outside where you can actually look at the structure, but it would’ve been cool to watch the confusing and chaotic traffic make it’s way through the circle.

While traveling we have the constant question of whether it’s better to buy online or buy when we get there. Since we were limited on time, had such a huge group and wanted to do things together as well as for things to run as smoothly as possible we bought most tickets beforehand. Unfortunately, for the Eiffel Tower we bought a couple weeks before for 41 euros and discovered we could’ve bought some at the Tower for only 17 euros! If you buy early enough you can find some for the original price before they’re all bought and resold for a higher price, or just wait in the long line at the Tower and buy.

Anyhow, the travel advice aside, the Eiffel Tower was awesome to take the elevator to the top and to look down. I’m glad we got to enjoy both riding in the elevator and going by stairway through the Eiffel so that we could experience both sides of it. One of the employees told us that they’d timed how fast someone could climb the 1,710 steps and they’d completed it in under 8 minutes! Carlos and Andy decided to challenge themselves to see how quickly they could run down… I don’t think the end timing was worth mentioning though because I never heard any bragging.

The famous Louvre Museum was the first museum we’d gone to since we’d arrived in Europe 4 months ago. We’re not museum going people, and we knew that we’d have to reserve our limit for when we’d be zipping through as much as we could in one day in the Louvre. We mapped out our visit as though it were a Saturday to-do list and came out triumphant. 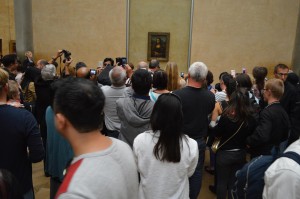 We visited famous paintings like the Mona Lisa, which is on the list of most disappointing tourist attractions because everyone crowds around it and apparently it’s smaller than a lot of people expect. I wasn’t disappointed in the painting, and in fact enjoyed the comical side of everyone crowding around it with their “disappointment.”

We’d spent a good few hours walking around the museum, and by the end of the day our feet were falling off. I was impressed with how much of the museum we were able to see, but it probably was only a sliver of what the Louvre has to offer. I’m okay with not visiting another museum for the rest of our Europe escapades.

Our considerably sized group of 9 became a substantial party of 13 when Pablo’s sister Sonia and her family joined us in Paris. Luckily we didn’t have to ask for a table too often when it came time to eat because we picked up crepes at food stands for the majority of our meals. However, we did get the chance to dine in at Le Bouillon Chartier; an authentic French restaurant that Amber’s local friend brought us to. 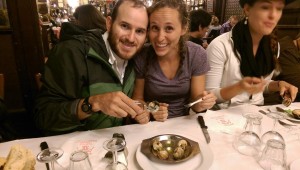 Le Bouillon Chartier is over 100 years old and a somewhat hidden restaurant, but Parisians were lined up outside to eat there. The restaurant is known for it’s decently priced and delicious food that our Parisian friend told us is a local favorite. We were daring and tried the escargot (cooked snail) that turned out to be swallow worthy since it wasn’t slimy, but instead flavorful and chewy.

Once it came time for us to pay our checks there was some confusion because the waiter wanted us to pay altogether instead of split bills (something we are so grateful of in the U.S. especially in large groups). Everyone started putting in their money for the bill, but when we counted it all up there was a good amount missing. The waiter became obviously frustrated and was talking to our local friend trying to hurry us out in order to sit some of the people waiting outside. We were able to figure out where the missing money was and left quickly. We were surprised at the waiter, and European restaurants in general with their insistent refusal to do separate checks.

Despite the unfortunate confusion and frustration at the end of dinner, it didn’t kill our mood at the end of the night. We walked around the city a little and reminisced over the fun times we’d had in the past couple of weeks.

Like all vacations this one had to come to an end, and so it did in Paris. Au revoir family, and au revoir Paris! Thanks everyone who made suggestions of what to do and see on our family vacation, it was one for the books!

What part of the Figueroa family vacation did you enjoy reading about most?