Our second destination landed us in Prague, Czech Republic for a couple weeks. We had been recommended to see the capital of Czech Republic and wanted to find out what the rave was all about.

When we first came into Prague we had arrived to where our airbnb address had said to go and the outside of it looked shutdown. I figured we were at the wrong place, but then our host arrived at the door and it was confirmed that’s where we were staying for a few days. It got worse when our host showed us into the apartment and we saw the kitchen, bathroom and bedroom which took about 5 paces to walk between each one. It wasn’t the fact that the place was small, but more that the smell of mildew was overwhelming and the neighborhood was sketchy. We compared the photos that were on airbnb to what the place looked like and had to laugh at the difference. Oh well, we had a place to sleep.

The Wi-Fi didn’t work well in the apartment so we had to go out for a few days to find restaurants and cafes that were okay with us hanging around for most of the day using their free Wi-Fi. We ordered the food from their place to make it less awkward and they seemed okay with us.

Even though we had a rough start, once we started to visit the famous spots throughout Prague we started to see what all the fuss was about. The architecture for one thing is amazing. The medieval feel to the castles, cathedrals and bridges were incredibly authentic. The history behind the structures made them even more impressive. Prague struggled with many fires in earlier years, the streets were so tiny that when a house lit on fire it would spread across the street and demolish all the houses in the area. Even after these problems, they rebuilt and the infrastructures still stand strong today.

We started by visiting Vyšehrad, the castle on the hill. It was estimated to have been built around the 10th century and in it’s grounds is the Basilica of St. Peter and St. Paul as well as the Vyšehrad cemetery that houses several famous Czechs. It cost to go into the cathedral, but the grounds were interesting enough without visiting that part. 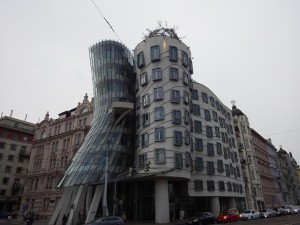 Walking through the streets of Prague we would come across some impressive architecture that wasn’t on a map. We did happen across the Dancing House, which is on tourist maps now due to it’s new glass architecture in the middle of all the old buildings. Walking to destinations instead of taking the metro everywhere proved to be a benefit to our sightseeing. We always stayed on busy streets and mostly went sightseeing in the day to avoid any problems.

The Charles Bridge is one of the top must-see attractions in Prague. It seems to always be filled with people even late into the night. The key is to go very very early in the morning, if you’re not up all night partying. We are going to try and make it at sunrise during the week when there will be less tourists.

The statue of St. John of Nepomuk (a Czech martyr saint who was thrown off the bridge into the Vltava river) is one of the most popular statues there. Touching the plaque under his statue is said to bring you good luck and make sure that you will return to Prague. 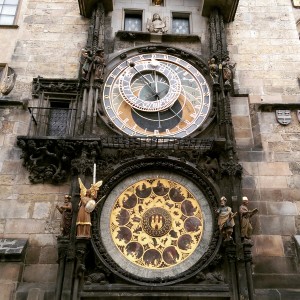 Across the street from Charles Bridge is an alley to Old Town Square. We didn’t need a map to get there, we just had to follow the huge crowd that migrated through the streets into Old Town Square. It would be difficult to miss it! The streets on the way there puts a new name to window shopping, with all the foods and shops that were so different from the U.S. There were many restaurants that had cabanas outside and made a great ambiance for the city, which seemed to say come and relax.

The Old Town Square houses the Astronomical Clock, which is the most fascinating clock I’ve ever seen. Tourists gather in front of the clock to see the procession of the twelve apostles on the hour, every hour. Don’t stand around waiting forever to see the performance like many do, go look around and come back. If you have time to watch it twice, then on the second time watch the expression of the tourist’s faces as they see it for the first time. The performance is listed as the second most disappointing tourist attraction,  the Mona Lisa being listed as #1. 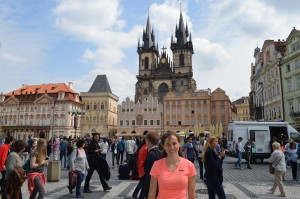 The Square has so much going on with the entertainers, food and sightseeing that we went back at least a few times. Around the square there is the St. Nicholas Church, the clock tower, and the famous landmark Church of Our Lady before Týn. The two towers on the church are dissimilar in size, one being larger than the other. Our tour guide told us that these two towers are said to represent Adam and Eve, the masculine and feminine characteristics of the world.

Petřín is a big park in the middle of the city making it stick out like a green thumb. Since I’m used to parks and more nature than city, it was a nice break to walk through the tree and grass landscape even though it was a steep hike. In the middle of Petřín park there is the Observation Tower that is a mini Eiffel Tower. We paid to hike the steps to the top and the lookout of the city was worth it.

The John Lennon Wall started out in 1988 as a way for students to write their grievances with the communist leader, Gustáv Husák. During the time of Communism western pop songs were banned, especially John Lennon songs. After John Lennon was murdered, someone painted his face on the grievance wall even with the risk of being imprisoned. The wall was painted over and over by officials, but the next day more poems and paintings were on the wall. The youth wanted their voices for peace and love to be shown on the wall. To this day people come to write on the wall and it changes year after year. We added our part to the wall and could see there are still John Lennon art and lyrics to his songs. 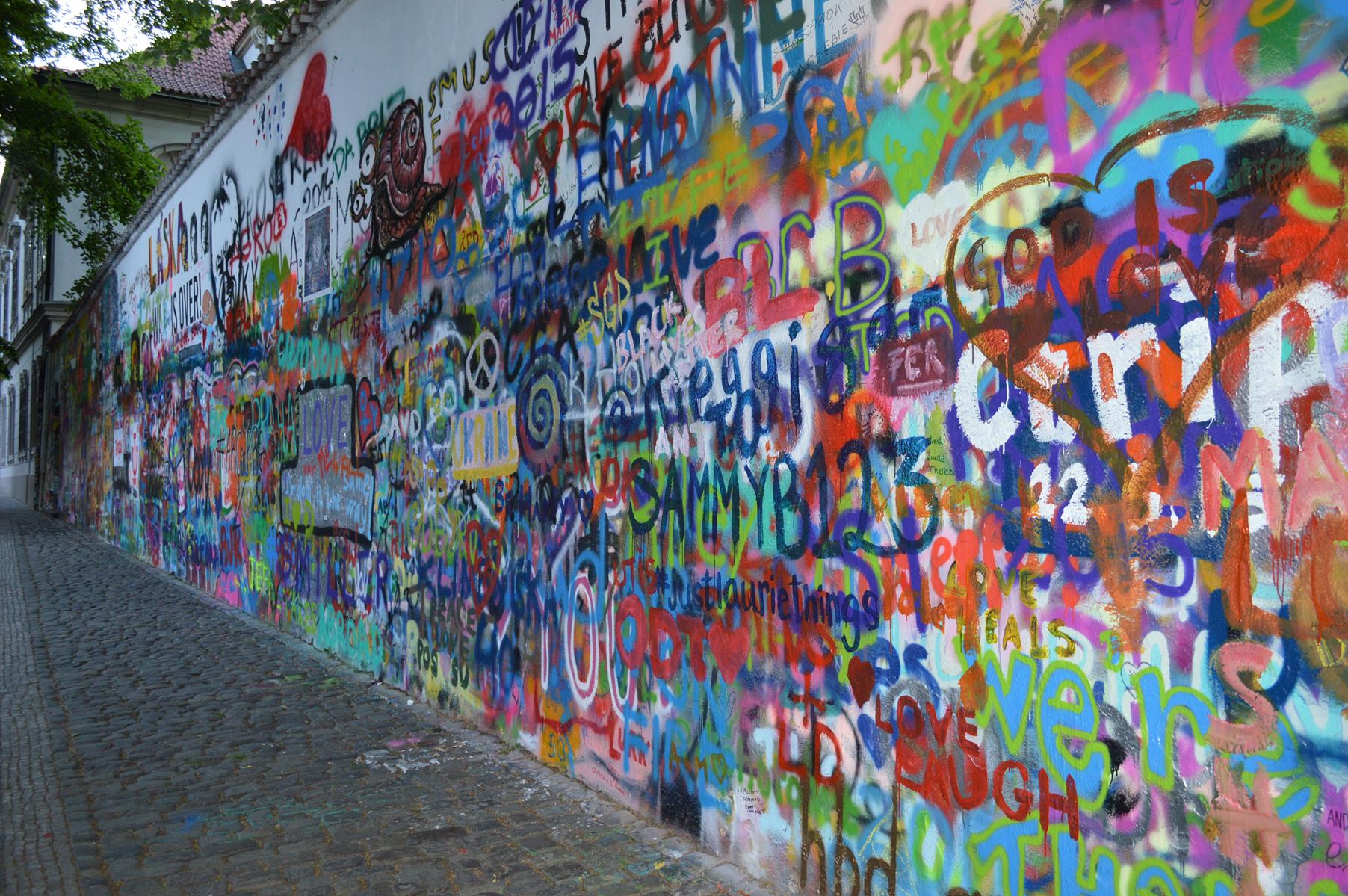 Have you made your mark in Prague by writing on the wall or touching the plaque of St. John of Nepomuk?