Impressions from the war

When we first arrived into Sarajevo, the Capital of Bosnia and Herzegovina, we drove past what is called “Sniper Alley” where the apparent signs of a past war literally showed on the buildings. Huge bullet holes were scattered heavily in the alley as well as all over the city where the military would snipe passersby. 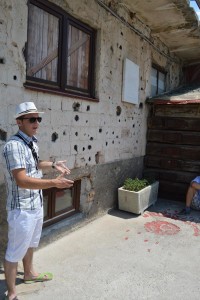 Near where we were staying there was a brewery that supplied the only sanitary water in town during the war and our host told us how his mother had to make the dangerous route just to get water. There were also many warnings to not hike off paths because they’re still searching for leftover landmines (many of which had shifted around due to a recent flood).

Scattered all over the city are Sarajevo Roses, which are impressions from the war made into the cement from the grenade’s explosion that were later filled in with red paint. The red roses are spots where at least 2-3 people were killed by the explosion.

Despite the country’s struggles in the past, we’d heard that tourists are welcomed and that people are easy to get along with. We saw firsthand how welcoming Bosnians were through our hosts, and felt so much gratitude for their kindness.

When we arrived into the bus station, our hosts picked us up in their car (after offering to pay for a taxi in case we didn’t want to ride in their “beat up car”- her words not ours- and we said it was okay, we were fine going with them). They drove us up to the place we were staying, walked us into the apartment and ensured that we were settled in. They didn’t really speak English so they were confused when we tried asking where a grocery store was. We told them we would set out and find one on our own, and said farewell. Not long after, they came back with delicious food that they’d gone out to get. We were surprised, and completely grateful again, then a little concerned that they thought we’d told them to go get food for us.

Our host, Edin, does tours of Bosnia including Sarajevo and other local areas that give tourists an insider’s look into the country’s culture and history. We joined his driving tour, which we discovered was the best way to sightsee; relax in an air conditioned van while your tour guide talks and drives you to the sites.

We took a day trip down to Mostar, which is a city in Southern Bosnia and Herzegovina, to see the famous Stari Most and Blagaj. Stari Most, meaning Old Bridge, was destroyed during the Bosnian War, but after 10 years of construction the bridge was rebuilt exactly the same way as before. It’s an impressive piece of architecture and another UNESCO World Heritage Site.

People gathered at the bridge and we joined those below Stari Most at the Neretva River to dip in the cold water. There were plenty of divers providing a show for tourists, but before they would dive they made sure to collect for their talent. We climbed up to the bridge to see how high up the jump would be and decided to leave it to the professionals. We walked around Old Town and stopped for some Börek and Ćevapi, which are both delicious authentic Bosnian foods.

A half hour bus ride from Mostar, is the village-town of Blagaj. We went inside the Blagaj Tekke, which is a Dervish house of worship. In order to enter Blagaj Tekke women had to put on long skirts and shawls to cover the head, neck and shoulders. Pablo was able to go in with his long shorts and T-Shirt, and enjoyed taking photos of the beautiful Tekke. 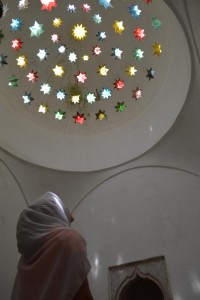 We were surprised at the strong Muslim influence in Bosnia (about 80% are Muslim in Sarajevo) and there were Mosques everywhere. We were in Bosnia during the month of Ramadan, which is the ninth month of the Islamic calendar and at dusk a firework would explode to signal that the fast for the day was over and that it was time to eat. At dawn the fast would begin again and the entire process repeated for a month. There were also prayers sung over speakers a few times a day in our area, and all these things were very different to us but also fascinating to witness. Getting to know Bosnia taught us more about the war here and its effects, but also how strong the culture is here.

Would you want to meet Bosnia?