The idea of this adventure started when we were in Peru. Pablo was talking about how it would be great to work online anywhere we wanted in the world. Since Pablo is a web developer this idea was actually a very realistic one (sometimes we have crazy ideas and dream a little too large for our means). We let the idea kind of simmer for a bit when Pablo had a job offer in Washington D.C. We talked about it, but it didn’t seem like the next step in our lives. I felt a little bit of an itching to try somewhere new, but was thinking it would be nice to see the east coast. Pablo had a bigger idea, what about Europe? I said sure, why not! 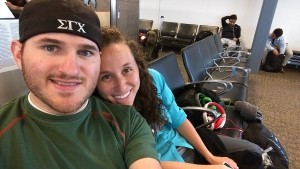 ransition has been interesting to say the least. We made the decision to move to Europe to be digital nomads around October of 2014, but it was official when Pablo bought our tickets to Copenhagen for my birthday in January. It felt like we were telling family and friends for the longest time that we were leaving, but that it was never going to come. We had talked about leaving to Washington D.C. and I wondered if they assumed it would fall apart as well, until we told them that we had bought tickets and the reality of it seemed to sink in little by little.

Getting rid of the odds and ends

Luckily we were only renting our house floor apartment so we didn’t have to worry about that, just had to let the landowner know when our last day was going to be. Our last days of work were the end of April and then we had a couple of weeks to sell our 2 cars and some furniture we didn’t want to keep in storage. We ended up not being able to sell both our cars before we left so we put my dad in charge of that, bless him.

The last few days before we left we had a whole floor of a house to pack up and clear out. I couldn’t believe how much stuff we had accumulated over time and had filled the space we were given. The night before we were leaving for Copenhagen Pablo’s family had come over to help us frantically throw stuff in boxes and clean the best we could. It seemed we had them walking out with so much of our stuff, but I didn’t care at that point.

After we left my family came by and cleared the pile of donations and random food left in the fridge. Again, bless our families for helping us, it may sound like they were benefitting from the free stuff but I’m guessing they didn’t want most of it. 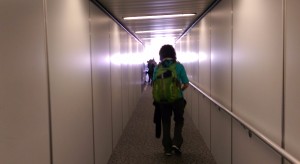 The hardest thing through all of this for both of us wasn’t selling our stuff or quitting our jobs to become digital nomads. The hardest thing through this transition was leaving all our family and friends and trekking out on our own. Both of our families weren’t far from where we lived and we would see them on a regular basis so it was a drastic change to our routine. However, if you want to have adventure you have to get out of your comfort zone. It may seem unpleasant at first, but if it is something you really want it is worth it.

What drastic changes in your life have you made?