All I could think of when we were heading to Belgium was chocolate and waffles so we instantly began the search to find them. There weren’t any to be seen at first, but the closer we got to the city center the more waffle and fry stands there were. 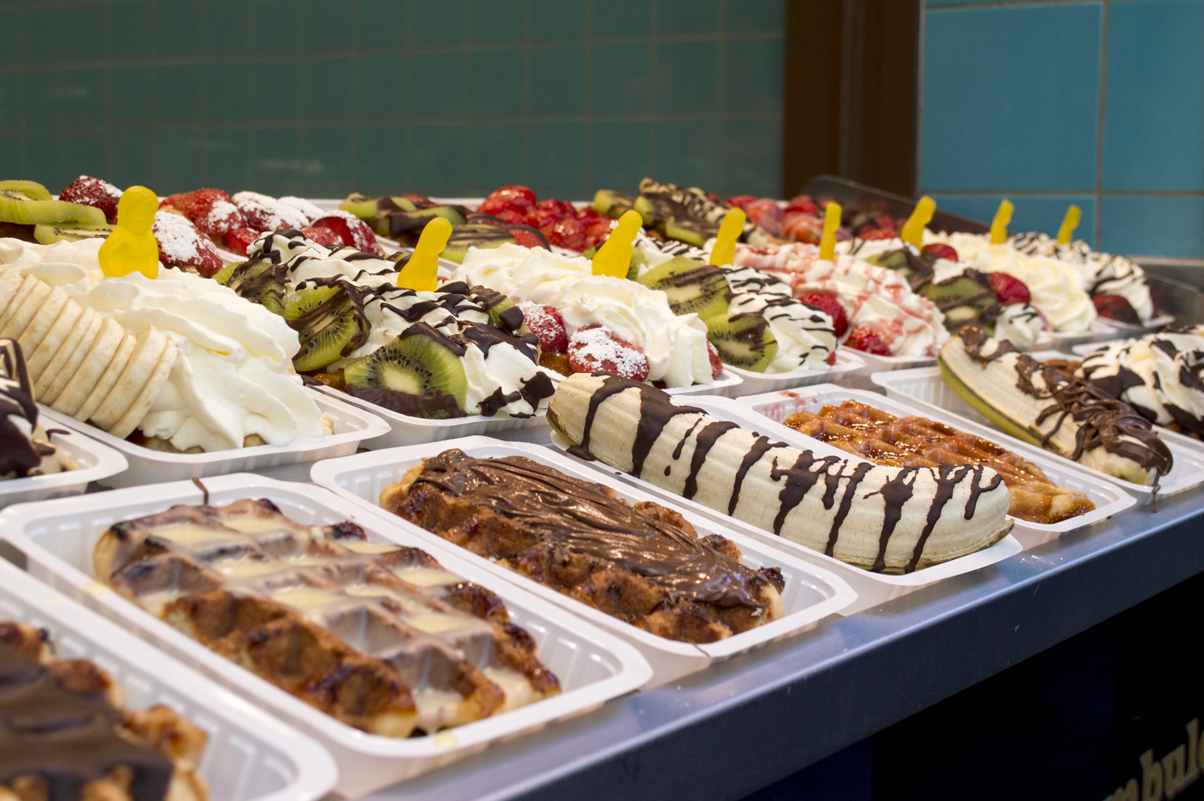 Brussels, the capital of Belgium, was about a 40 minute train ride from where we were staying in the countryside. We loved being away from the city and having the peace and quiet that comes from staying in a small town. 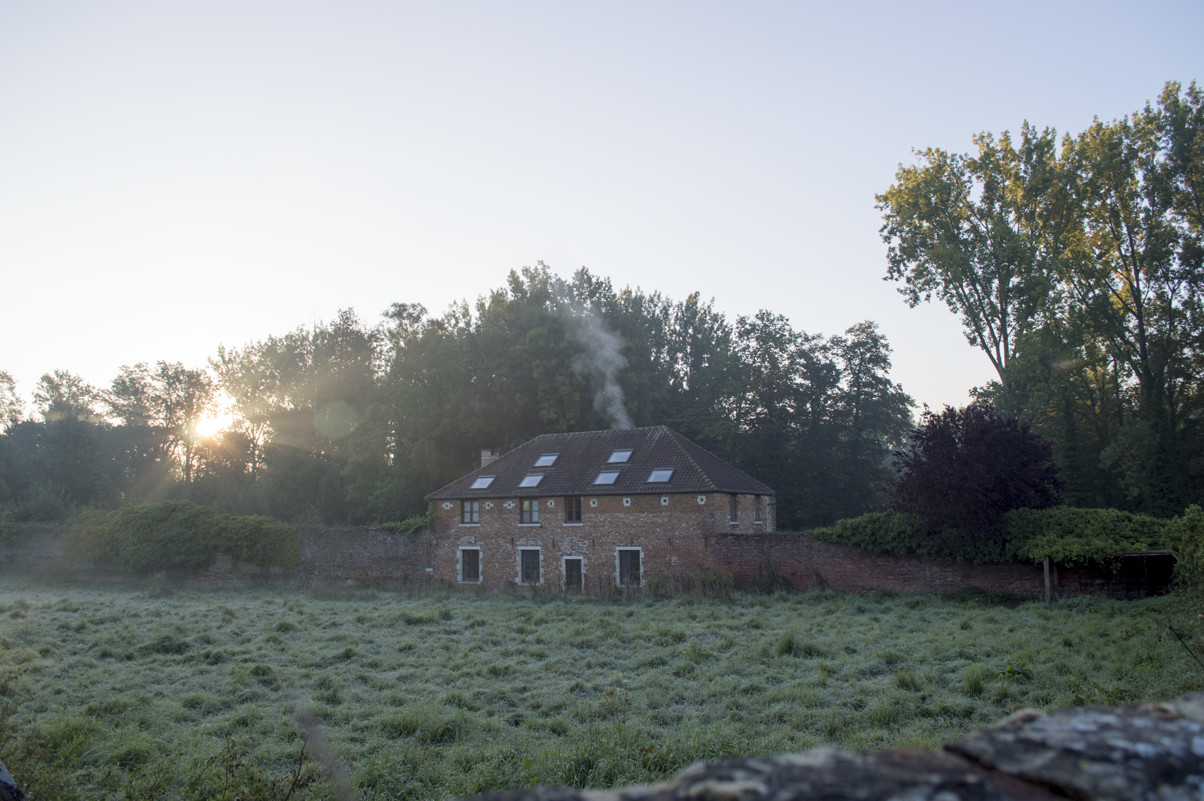 We took a train into Brussels on a couple occasions, and like every seemingly simple task, it ended up being more exciting than we would’ve preferred. Public transportation announcements were done in French without English translations so when the announcement that passengers needed to move to the front of the train for our stop we of course missed it. We opened the door to exit and looked down to see a 3 foot drop onto the train tracks. It would’ve be easy enough to jump, but we were unsure if the train would move closer to a platform, which it didn’t. Instead it went to the next stop about 1 mile away and a local sitting across from us told us what the announcement had said. We got off at the stop after ours and walked back wishing we’d known French.

In Brussels we needed a car to see some of the sites further out from the center, but enjoyed walking around the famous Grand Place. Surrounding the Grand Place were all the Waffle shops so you can see why it’s the best. For some odd reason there’s a statue that’s popular in Brussels called Manneken Pis. The statue is of a little boy peeing and he’s been peeing since  the early 1600’s. There were groups of people surrounding it and I felt ridiculous that we were there as well, because a statue of a boy peeing is weird and tourists are weird surrounding it. 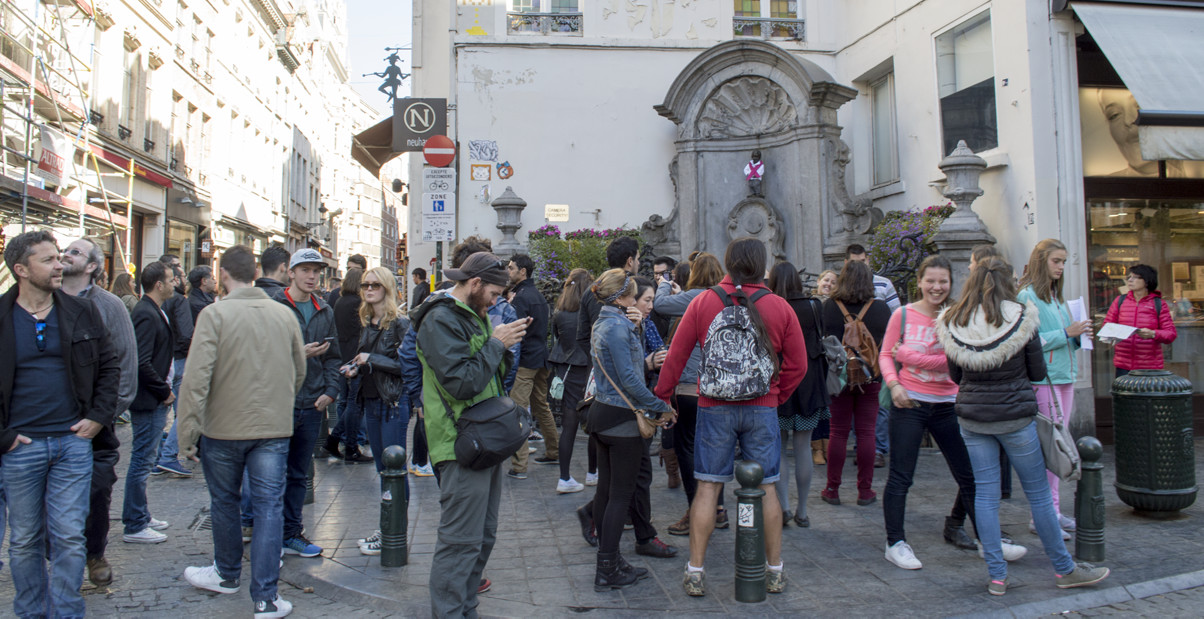 As if a statue of a little boy peeing wasn’t weird enough, there’s a statue of a little girl peeing called Jeanneke Pis. The Jeanneke Pis was meant to be a counterpoint to Manneken Pis, although Manneken gets more of the fame (poor Jeanneke). Manneken Pis is dressed up all throughout the year, and while we were there in October he was wearing a white shirt with a pink ribbon around his neck. He seemed a little like the Calvin character from the Calvin and Hobbs cartoon strips and stickers where you see Calvin peeing on things he doesn’t like (in this case I’ll go with the assumption he’s peeing on breast cancer). Thankfully Manneken Pis wears trousers, but unfortunately it doesn’t seem that Jeanneke will get any.

Antwerp isn’t as glamorous as Bruges, charming as Ghent, or stocked with waffles like Brussels, but it’s worth the attention from a traveler. Antwerp’s Cathedral of Our Lady is impressive and hard to miss towering over the neighboring buildings. Next to it was the City Hall and the Grote Markt, which were my favorite because of the gothic construction style of the buildings. The city lies on the River Schildt, and just walking along the river for a few minutes we saw 2 castles. Of course, we love our castles, but didn’t have the time to walk through them. We were on to the next cities! 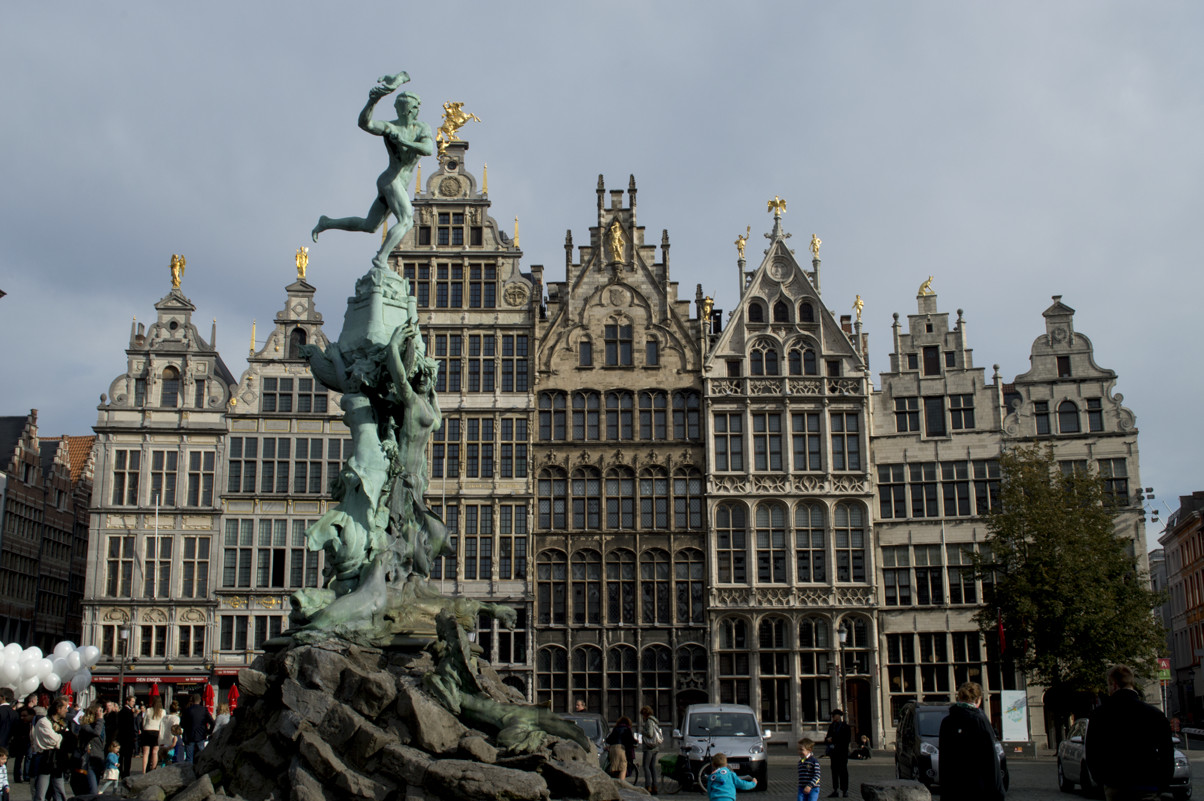 Thank goodness for the last minute decision to stop in Ghent for a brief time. Basically we drove through slowly, parked illegally to stare at the castle, and then unfortunately that was all we had time for. Better to have seen something once, however briefly, than to never see it though! If you have time, make sure to spend more time in Ghent and Bruges (at least a couple of hours for each) to walk around and enjoy the charm of these little towns. 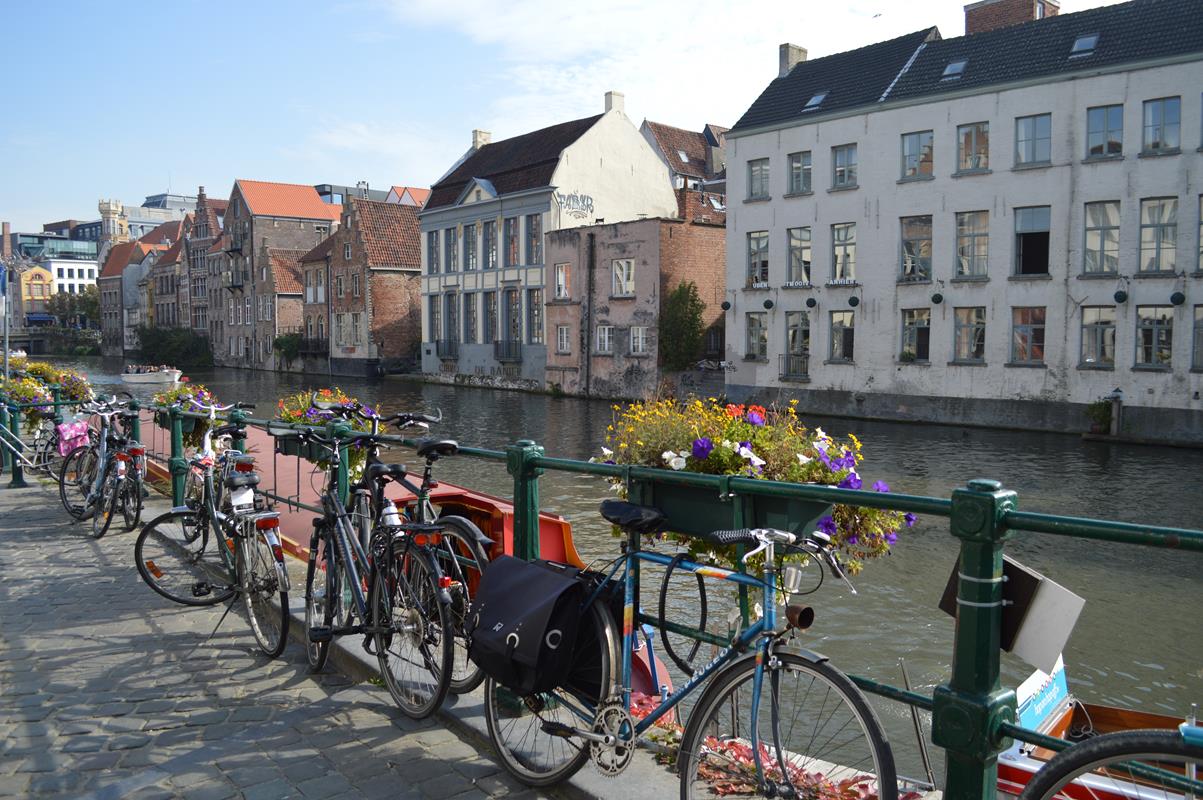 Belgium was another bike loving, bike owning, cars get off the road because you don’t belong there kind of country. While in Ghent we actually had a biker try to get around us and then yell at us for going slow. Tell you what, I wouldn’t be dumb enough to yell at someone behind a ton of metal that could run me down… But lucky for her Pablo is a sweetheart and didn’t get mad.

This was an amazing city that reminded me so much of Venice. It’s actually referred to as “The Venice of the North,” and there were canals, bridges and boats passing by the deeper we went into the city. However, Bruges offered a lot more chocolate, waffles and fries so I knew I wasn’t in Venice (there also weren’t any singing gondoliers). 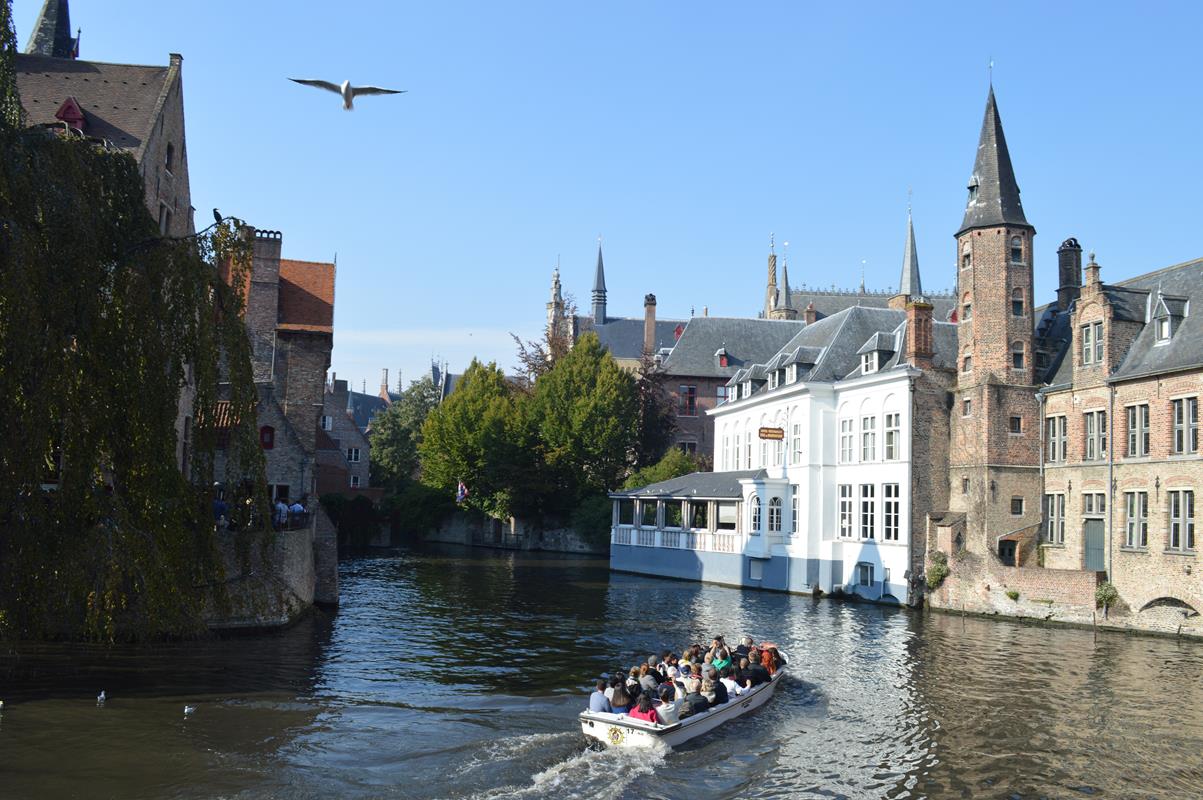 First thing we did when arriving in Bruges was to hunt down a place to eat. We’d heard of Chez Vincent, which is a burger joint, and it’s reputation for having amazing fries, or “frites.” Lucky for us it was practically right in front of us once we walked into the town. Their famous fries and reputation does precede them and anyone traveling to Bruges, or Belgium in general, hasn’t made their vacation complete without going to Chez Vincent’s.

While we were walking around the city the crowds were thickening and the streets were full of people walking, bikers, cars, horses and buggies. It was crazy, but we seemed to drown them all out when taking in the scenery. We had driven to Bruges in the afternoon and by the time we were leaving the throng of people had increased even more, which made driving out of the city a challenge. Despite the suffocating crowds, Bruges was our favorite city to visit in Belgium.

Which city would you prefer to visit in Belgium?