Let me just say, the start of our Barcelona trip did not begin well. Our AirBnB canceled on us right before we were getting ready to hurry to the metro at 1:30 AM to make the last metro to the Madrid Airport at 2 AM. We missed the metro so we waited a half hour for a bus to take us to another bus to take us to the airport and arrived 5 hours before our flight. We slept on the ground in the airport until our flight and then arrived in Barcelona searching for a place to stay. By noon we arrived in the place we’d found, hungry, tired… maybe a little grumpy? However, we slept, ate some cereal and were close enough to our normal state.

We had a week in Barcelona before the long awaited family trip was to begin so we spent a good majority of the time working and relaxing in our ant infested apartment. We did get a chance to go out a few times for some fun and more specifically to a Barcelona Fútbol game!

If you’re a soccer fan I would expect going to a Barça game would be at the top of your list of things to do when traveling to Barcelona. The timing happened to be well enough that there was a game the Saturday we were there and we instantly bought tickets with no regrets. Granted our tickets were in the nosebleed section and there weren’t 2 seats next to each other, but who cares! It’s Barça! 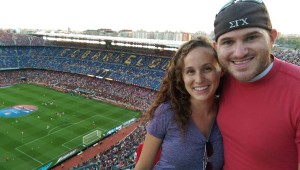 We arrived plenty early enough and hiked…. and hiked… and hiked, and arrived to our seats sweaty despite the “cooler” night temperatures. There were plenty of open seats and we decided after hopping around to different seats to just sit together and see if anyone kicks us out of our spots (which never happened).

We devoured every minute of the game, ready to jump up when Messi got the ball (several times throughout the game of course). Barça finally scored in the 75th minute, and we were excited but I have to admit a little disappointed that it wasn’t Messi who scored. Barça didn’t have the most exciting game that night according to the locals, but it made 2 travelers very satisfied to attend the match.

Finally, the time had arrived for Pablo’s family to join us in Barcelona to start our European Shenanigans and we were too anxious to work that day so we went out food testing in preparation for them. Once the time came around for them to be getting to the AirBnB we listened for the buzzer. We checked to make sure it worked, made a sign for them in case they didn’t know which number to push for the apartment and waited. It started to get very late and yet still we waited. We were beginning to get worried, Pablo planning to go out looking while I stayed in the apartment in case they come. Just as Pablo was getting ready to head out we received a message, “We’re lost.”

How a group of Spanish speaking travelers got so lost in Spain we weren’t sure, but we waited to make fun of them until they were at the apartment. After another half hour of waiting, we finally heard the buzzer and anxiously brought them inside. Once they got settled in, we went out for tapas and ice cream to begin our family expedition.

With the combination of Pablo and I going to La Tomatina (pretty much no sleep for 24 hours combined with shouting over the crowds), staying up almost all night at the airport, and yelling at the Barça game we’d undoubtedly gotten colds. The last time I’d seen the family I had an awful cold, and didn’t get one until they came to visit. Typical. The only good thing that came from this was that Pablo sounded like Batman for a couple days and provided us all with entertainment. (Don’t worry, he wasn’t in incredible pain, and I have a video of him talking if you want to see it).

Gaudí and the beach 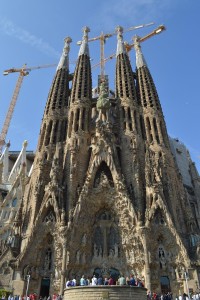 Antoni Gaudí was a Spanish/Catalan architect whose work can be found throughout Barcelona. He used nature as his inspiration, as you can tell through the architecture of the incredible Sagrada Familia and Park Güell, and his ideas influenced Barcelona’s building designs.

When entering La Sagrada Familia and gazing upward at the high ceilings and colorful stained glass windows I felt like I’d walked into a forest. Like in Park Güell, despite the crowd of people we were able to still find space to enjoy the artwork and beauty of the architecture. The outside of Sagrada Familia reminded me of the beach and instantly I was wanting to go for a swim.

It was one of our friend’s first time to a beach and what better place to go for the first time than in beautiful Barcelona! Granted, we did see some semi-nudists on the beach, but it just added more to the experience! We dropped our stuff on the sand and ran straight for the water… we loved the beach! Also, I’m pretty sure we were the only ones building a sand castle and people seemed perplexed at why a bunch of adults would be doing that.

After Spanish speaking church on Sunday we headed off to Montjuïc, which is an unmissable hill in Barcelona that has several points of interest on and around it. We took the convenient escalator (one of many conveniently placed escalators on hills in the city) up to where the beautiful Palau Nacional (National Palace) overlooks the streets. It was a perfect day to sit on the steps and listen to the locals play music. We couldn’t sit for long though because we wanted to move on to Montjuïc Castle. 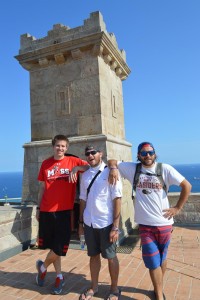 Montjuïc Castle is an old military fortress with roots dating back from 1640 and it sits on the tip top of the Montjuïc hill. We huffed and puffed up the hill, and were so pleased to find out that it was free to enter the castle grounds (like a lot of places in Europe; free entry on the first Sunday of the month). Lucky us! The castle grounds had panoramic views of the city and ocean, and would’ve been worth the €5 if we would’ve had to pay it.

To end our stay in Barcelona we visited the Font Màgica de Montjuïc, which is a spectacular water fountain at the front of Plaça de Carles Buïgas that puts on a music, light and water acrobatic show that entertained us for a long time. This is where you’ll need to keep a hand on your bags because there are pickpockets all over this place. The show is completely mesmerizing and therefore very distracting! 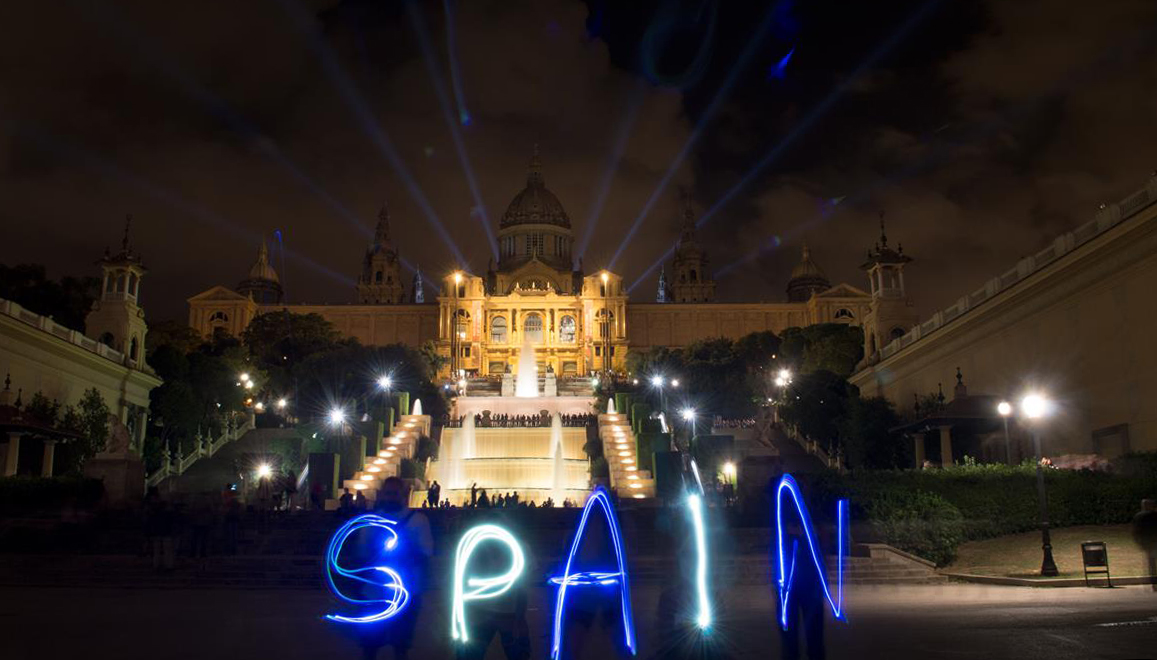 Our own creative light show!

What Shenanigans have you experienced in Barcelona?