We’re proud to say that we were able to cross off a long awaited bucketlist item, Bran Castle in Transylvania. We had quite the experience trying to get a car to drive to Bran Castle, and we learned that driving there on a Saturday is a bad idea but still very much worth it! Driving through the canyons and seeing all the castles was phenomenal!

We definitely need to do better at booking in advance. Some cities have lots of car rentals, but as for Bucharest there is only a few in comparison. We found a bunch of places on Google maps that said car rentals but when we showed up there was nothing there. The best we could find on late notice was €50/day for the weekend or €26/day on Monday with no a/c. We wanted the weekend to see as much as we could. We asked our host if he knew of other places and he said we could rent his car for €15/day, Done! We didn’t expect a Ferrari at that price and we were just excited to get to drive to Transylvania. The car was in okay shape, but it’d seen better days. We were able to get there, but were only able to hit 100 km/hr on the freeway instead of the 130 like everyone else.

As many of you know, I am a big fan of castles. One day I will build my own castle and live in it, but for now I will settle with going to as many castles as I can in Europe. Up until now we’ve been able to see a few here and there. Some look more like palaces or mansions and others are more the medieval stone castle style. Romania has a lot of castles and fortresses and we were able to see a few during our 2 days in Transylvania. 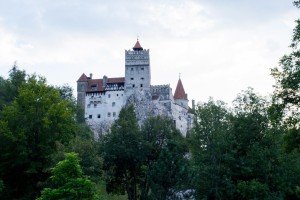 Bran Castle in all its glory

Bran Castle – A.K.A. Dracula’s Castle, is probably Romania’s most famous castle. Of course, being known as Dracula’s castle helps it’s popularity contest especially since the explosion of vampire books, shows and movies. Although Bram Stoker (writer of Dracula) never actually saw Bran Castle, it apparently fits the description he gives. This castle was built in medieval times and has that old-school look everyone is hoping for when seeing a castle. It was very crowded but you can buy a ticket and explore the whole castle. One of the best shots of the castle is to the right of the main path just below the hill.

I remember years ago I was talking to a friend at work about going to Bran Castle and staring at the Bran town on Google maps wondering when I would make my way there. Well, if I remember correctly that was around 2007-2009 time frame. So under 10 years and I was able to get to one of my big bucket list items. Make goals my friends! 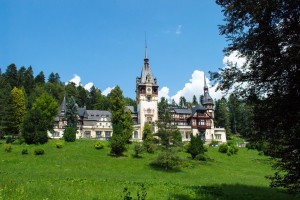 Peleş Castle was a sweet surprise. We saw that it was on the way from Bucharest to Bran so we added it to our road trip and we highly recommend stopping here! Built between 1873 and 1914, Peleș is a Neo-Renaissance castle on the route between Transylvania and Wallachia (where Vlad the Impaler is from). In the same area, walking distance, is Pelişor Castle which mostly looks like a mansion, but still cool. Throughout this area people were selling berries of all kinds. We didn’t end up getting any and regret it.

A plethora of castles

As we made our road trip through Transylvania we saw at least three other castles that we didn’t even have on the map, but were worth seeing. We didn’t have time to stop at all of them, but got pictures as we drove past. Romania has a beautiful countryside to drive through and if you’re planning on making your way through, I hope you take the time to not only stop at Bran and Peleș Castle but to also stop into some of the small towns along the way. They have their own charm that will be worth the drive. 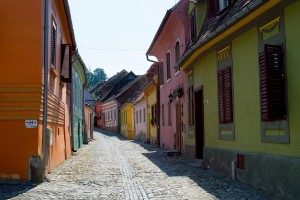 One of Sighișoara colorful streets

To finish up our Transylvania expedition we had two UNESCO sites we wanted to make it to. The first stop was at Sighișoara. This is a beautiful city with lots of amazing sites. Hiking up into the old town is a must! The small alley ways and colorful houses are exactly what we wanted to see. We spent about two hours walking around before we had to leave to make it to our next stop.

Have you had the chance to cruise around Transylvania? If not, put it on your bucketlist!