The Venice of Venice

Like a lot of people in the World, I’ve been wanting to visit Venice ever since I knew it existed. However, unlike a lot of people (I’m guessing) I’ve had a strange fear that Venice would actually sink before I got to visit it. I know, I need to stop watching end of the World movies and other dramas because I actually wonder the possibilities.

I’m glad to report that I made it to Venice before it sunk, and that it is as cool as I expected it to be. I’ll just say right now that we weren’t able to ride on a gondola, but maybe we’ll be willing to fork out that much money for one when we’re old and don’t want to walk around the city exploring the streets on foot.

While in Venice we did a boat tour that took us to three famous nearby islands. The three small islands are famous for their products as well as their charm. We had a few hours total to visit all three islands and our first stop: Murano Island.

Murano is famous for it’s glass making and right after arriving to the island we were brought to a shop to watch an experienced glassblower create a horse figurine in a matter of minutes. Once we were able to watch the impressive and seemingly effortless technique of the glassblower we walked through the rest of the shop looking in awe at all of the glass works. Once we’d weaved our way carefully through the shop it was about time to go back to the boat and off to the next little island. 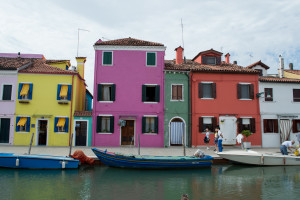 Burano Island is known for it’s lace as well as it’s colorful houses, and is referred to as a “mini Venice” probably because it’s the most charming of the three islands. On the island there’s a lace museum that some of the tour group was shuffled to, but we avoided the presentations to set out on our own search of the island’s charm.

The last Island, Torcello is mostly known for it’s Cathedral of Santa Maria Assunta and Ponte del Diavolo (Devil’s Bridge), which ironically enough happens to be the bridge that Carlos and Andy dangled me over the side of. The island’s more for relaxing and solitude from the crowds since it’s mostly uninhabited so we were okay with a quick, short visit.

Walking the streets of Venice

Venice was a unique destination for us because in several ways it was unlike any other place we’ve visited. Once we crossed over the mainland bridge to the Island there were no more vehicles, and not even bikes. We walked the streets with the sounds of singing gondoliers instead of car engines and honking. It was the weirdest and coolest thing to have to find bridges all the time and to be lost most of the time. 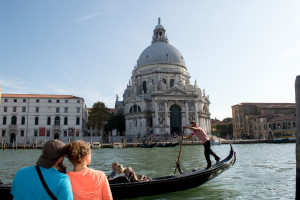 Besides going to the three islands we spent the rest of our short trip walking through the never-ending streets. We visited the Doge’s Palace next to the Piazza San Marco where the Saint Mark’s Basilica is (which was under construction) stopping in shops and snack shops along the way.

Something cool I would recommend seeing while in Venice is inside Saint Mark’s Basilica to see the Triumphal Quadriga. The Triumphal Quadriga are a set of four bronze horse statues that were originally a part of a monument for chariot racing horses. These four particular horses have been looted back and forth throughout history, one of the looters being Napoleon Bonaparte. Napoleon looted the horses from the Basilica in 1797, but they were returned in 1815. The original horses are now on the inside of the Basilica for preservation, and replicas stand at the front of the Basilica.

What else is there to see in Venice? 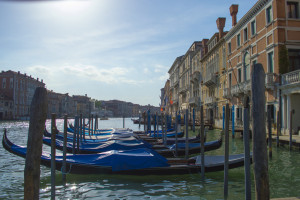 There are more specific places to visit that are cool to see, like the Rialto Bridge (also under construction while we were there), Santa Maria della Salute and many amazing ancient churches, but we didn’t feel like we were missing out by just turning down whatever street we felt like. Venice is like it’s own little World where you don’t feel pressured to see or do anything in particular except whatever you feel like in the moment.

A nice viewpoint of Venice was when we were sitting at the point by Santa Maria della Salute and could view the Church of San Giorgio Maggiore from across the large canal. We just sat watching the gondolas bob in the water and the seagulls eyeing us hopefully. Maybe it’s the sound of the water that makes people want to relax in Venice, or it’s the slow pace of the culture there. Either way, Venice you did not disappoint.

What are your expectations of Venice?