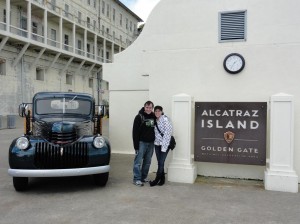 This was our first trip after our honeymoon. We wanted to get away somewhere not too far, and also not expensive. We decided we wanted to visit San Fran and instead of flying or driving we took the train! Neither one of us had traveled far distances by train and thought it would be a fun experience. It definitely was one I wouldn’t forget!

There were large rooms that had room for families of about 4 and then couples rooms that housed 2. Both rooms were compact and had beds which were not the comfiest that would fold out from the walls. This cost a little more than sitting in the coach cars with everyone else so we only got a room on the way there and sat in coach on the way back. Surprisingly coach had more comfortable chairs, you just had to sleep through the noise of people around you. 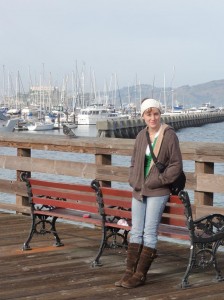 Once we got to our train stop in San Francisco we took a taxi to where we were staying, which happened to be a friend’s house. Every time we had to enter the city we had to pay a toll. This got to be very expensive and we only went in the city a couple of times. While we were there we went to the famous rock, Alcatraz. We rode a ferry and got a tour guide, the whole thing was very cool.

Also while we were in the city we went to pier 49 and got soup in bread bowls. Afterwards we did some window shopping around the pier and visited Wripley’s Believe it or Not Museum which had some crazy things. After eating ice cream at the famous Ghirardelli’s, seeing the pier at night and the golden gate bridge our trip was coming to an end.