We were so excited to come to Madrid! This is our first western European country and the first one were I can speak the official country language! We knew we had to make it to Madrid by late August but with our travel plans we seemed to be going further and further away. Luckily airline tickets from Bucharest aren’t too bad.

We’ve learned some important things coming to the capital of Spain. First, western Europe is more expensive than central Europe (no surprise). Second, knowing the language of where you’re visiting is a lot of fun. Last, but not least, Madrid is a must see city in Europe!

Our flight from Bucharest was an early one, leaving at 4:30 in the morning! We had to walk about 15 min to catch the night bus that was direct to the airport. Bucharest has two airports on the same road. The first one is the private airport, we saw planes and buzzed to get off. The driver didn’t stop right a way so by the time we got off we were about 20 min walking time to get back. The bus driver jumped out after us and said: “Airport?” and waved us back in. We walked back on and some of the locals explained that this bus terminates at the airport we want. We were definitely blessed that they helped us out because we would’ve been in a bad neighborhood in the middle of the night, and missed our flight.

We got into Madrid bright and early at 7:30. The metro we took from the airport should have dropped us off a few blocks away, but they were doing construction on the line and one stop away it turned around and went back. We found out we had to jump off and take a special bus to connect us back to the route. By the time we made it to our street we were 30 min late. Then we started looking for our apartment and couldn’t find the number anywhere! We asked around and no one knew where it was. Apparently the street starts at 2 on one side and 3 on the other side. We had the address for number 1.

We found a local that let us use his cell phone to call and found out we needed address 13?! Not sure why they gave us the wrong one, we ended up spending over an hour to find the place that did not exist. Once we finally got our place we were able to rest. 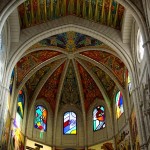 One thing is for certain, the architecture in Madrid is top notch. On our first day of exploring we made it out to Almudena cathedral (which doesn’t look like too much from the outside, but the inside is astonishing!), Palacio Real of Madrid and other places near by. We did a lot of walking, but it was well worth it.

Our last day in Madrid we made it to Plaza de Cibeles to see the Communication Palace. This is the building you see in most Madrid pictures. We took pictures from every angle. We ended up coming here again at night which was cool to see, but we were trying to make our connecting bus to the airport so we weren’t able to stop and admire it. We recommend seeing the Communication Palace at day and night if possible. 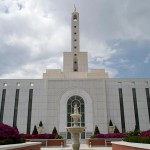 We were excited to see the Madrid LDS Temple. It’s out a ways on the east side and We had to take two metros to get there, but it was well worth it! We loved going to the temple and were excited to see one. We haven’t seen a temple since Copenhagen because all the other countries we’ve been to after don’t currently have a temple. 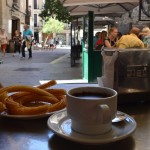 There are some good eats in Spain and we had a good time trying a few of the plates in Madrid. One of our favorites was the churros con chocolate from Chocolatería San Gines. We also tried a few tapas and were recommended bocadillo de calamares (squid sandwich). When we had to ask for a local’s phone to call our host he asked how long we were going to be there and he said to give it a try, it’s what the locals eat and to try it from La Ideal by the Plaza Mayor. We tried it. It was interesting… fishy and squishy!

While we were in Madrid we got some good tips from a local for where to go eat. It’s a very comprehensive list of places in different areas. If you are looking for “what to eat in Madrid” this is a good post to check out!

We were told to go to Toledo while in Madrid, we are glad we did and it was only a short 45 min bus ride at 9 euros round trip. If you have the time, take a day trip to Toledo.

Another place we were able to visit was Buñol, this is south of Madrid and we’d purchased La Tomatina package from Madrid which included a bus there and back. Check out our linked posts to learn more about Toledo and La Tomatina.

Did you try the squid sandwich in Madrid? Will you try it when you visit Madrid?